While the COVID-19 pandemic is preventing most congregations from meeting inside their sanctuaries, South Carolina Baptist churches are discovering some creative ways to still gather for worship.

Many churches are using various forms of social media and technology to continue sharing the gospel, but some, like Mayo First Baptist, are moving outside their church walls.

Mayo First parked cars on its softball field last Sunday and Pastor Glenn Rusher preached from the porch of its fellowship building. The services are also being posted using Facebook Live.

“Our drive-in service this morning (March 22) went very well,” said Pastor Rusher, noting he saw about 48 car-loads there. “While we could not count heads accurately, we believe there may have been about 110 persons present,” he added.

The attendance was close to typical Sunday morning numbers, but also included in the total were people from at least seven other area churches. During the time the service was live on Facebook, there were 568 hits, which easily exceeded the number that Mayo usually sees.

“There were some who watched on Facebook in Georgia and North Carolina,” Rusher said. Several people also watched and listened from the porch of a nearby home, he added.

The response has been very positive, Rusher said. “I personally went to almost every car before the service actually began, and everyone was excited and appreciative that we were having a service that they could attend — and, well, just happy.

“Considering that we only made the decision to do this on Thursday evening, I am well pleased with the results,” he said. “I am really expecting and looking forward to even greater numerical results next Sunday.” 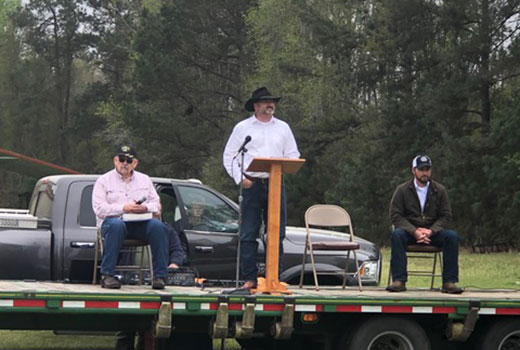 Three Colleton County churches are coming together for drive-in services.

Some, like First Baptist Church, Barnwell, are turning back time, using radio technology similar to that used by drive-in movie theaters more than half a century ago. When attendees park, they turn their radio to a predetermined station where they can listen to the service inside their cars.

Barnwell Pastor Bart Kelley said plans are in progress for a “Drive-in Church” at Veterans Park on March 29. “There is enough parking there for 500 cars, and it is our expectation that it will be full,” he said.

The church will use an FM transmitter with an approximate range of a half-mile. The service will be no more than 45 minutes long, so portable restrooms will not be needed. Words to songs and Scripture will be posted online so worshippers can follow on their phones. As cars exit, volunteers will have five-gallon buckets to accept tithes and offerings on either side of the car.

“Once we get the order plan in place, we will open the service to other churches to help lead music, preach, and provide special music,” Kelley said. “It is our hope that in the end, many churches (the body of Christ) will come together in a multi-cultural, blended-style service to worship together with no church building walls separating us any further.

“Wow! What an idea — church as God intended,” he added.

Bethany Baptist, Westville, in northern Kershaw County — one of the areas in the state where the coronavirus has struck the hardest — is another church that has turned to short-distanced FM broadcasting at drive-in services.

“I just wanted to share what a blessing this morning (March 22) was for us,” Pastor Craigan Blankenship posted online. “We had our first Sunday morning drive-in worship, and had over 80 cars with around 250 people in attendance,” he estimated. The church also used Facebook Live to stream its services online.

“Praying for you all, that God would use these times for His glory as He teaches us new ways to do ministry,” he said, adding that a church member built an offering box for people to drop offerings off as they left the parking lot.

Jay Black at Spring Branch Church in Nichols reported that its drive-in church, which also used a radio broadcast, saw 27 cars, with most having two or more people inside. “We will be doing it again,” he said.

Transitioning to an all-online format for church services has brought changes and new challenges for many congregations. Like Morehead, who has never used Facebook before, some are learning to post and livestream to stay in touch better with members.

For some churches, it was the first time livestreaming services online. Pastor Richard Busha at New Horizon Church in Anderson set a tablet on a music stand and focused on the pulpit area. At 10:30, his wife pressed the Go Live button and “it was on.”

“Probably reached 10 times the people we would have ministered to in person,” said Busha, who leads a new church start that “on a good day” has about 30 people in attendance. “At last count, I saw 650-plus views and 15 shares.”

For others, livestreaming church services on various social platforms has been the norm, but going “online only” may mean making a few format changes. They are already adjusting sermon content and length to best fit an online audience.

Benji Ladd, executive pastor at Brushy Creek Baptist in Taylors, said his church wanted its service to be more interactive and engaging than the typical online services it provides when most people are on its campus.

Watching online is different from actually being present in the room, Ladd observed. In addition to shortening the sermon, they opted this past Sunday for a panel discussion approach.

“We felt we definitely had to shorten the sermon and allow them to engage by hearing from other staff members and texting in their own questions,” he explained. “We seemed to get a good response from our people, and after looking at the analytics, we held a far greater percentage than normal.”

A staff member was relaying questions to Interim Pastor Tony Beam during the broadcast, and Beam said he had so many questions from viewers that he took a good number home with him to answer later. More than 2,600 households watched on Facebook, and an additional 500 viewed the service on other social media platforms. “We’re excited by the response, and we would like to find a way to continue this interaction even after our services return on campus,” Beam said.

For many pastors, gaining some live-streaming capabilities and increasing their social media ministry presence are useful tools that will continue to aid their ministries — even after their churches are able to return to their regular meeting places.