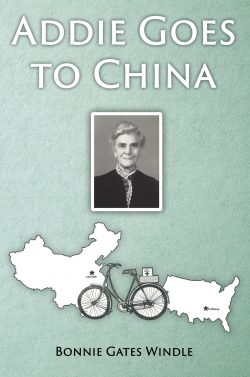 When Bonnie Gates Windle was a teenager in the 1950s in Pickens County, Ala., a “small lady with white hair” would visit her church and tell spellbinding stories about her years as a Southern Baptist missionary to China.

The speaker was Addie Cox, a fellow Alabamian who served as a teacher and evangelist in China during the first half of the 20th century, including during World War II and amid the occupation of China by Japanese military forces.

Cox’s visits to Spring Hill Baptist Church “lit a fire in my heart” for missions, said Windle, who herself has taken 15 mission trips to Brazil and served in missions support in many other ways.

Because of the influence the diminutive “Miss Addie” had on Windle’s life (and not just from a distance — Cox was a friend of Windle’s grandmother), Windle has written a book about the missionary’s life in “Addie Goes to China.”

She set out to write her book with younger readers in mind, but it ended up with more content than she originally planned (including nearly 50 photos), and she feels the book will appeal to a wider audience.

For author and former missionary Rosalie Hall Hunt, reading “Addie Goes to China” was like “taking a walk on memory lane.”

“I knew Addie Cox when I was a little girl growing up in China and thought she was a tiny dynamo,” said Hunt. “I’m thrilled to see Addie’s story shared, so that those who love missions can learn of the ministry and courage of a tiny little woman who braved the unknown for the sake of sharing the good news.”

Thrath C. Curry, a friend of Cox who helped compile stories about Cox’s life and missionary work, said Cox’s adventures in China were “so dramatic that they remind us of the Apostle Paul.” Thrath said Windle “has done us a great service” by getting Cox’s story into a book.

Windle recently lost her husband after 61 years of marriage. She remains active in missions through Pickens Baptist Association, including doing missions work at a federal prison for women in Aliceville, Ala.

Windle hopes “Addie’s memory and her devotion to Jesus will be kept alive in the generations to come” and that God will use her book to call out other people to missions work.

The author is available to speak to groups and can be contacted by email at bonnieassistant1@gmail.com.

“Addie Goes to China” is available from major online booksellers. To request a signed copy from the author, write to her at the email address above.