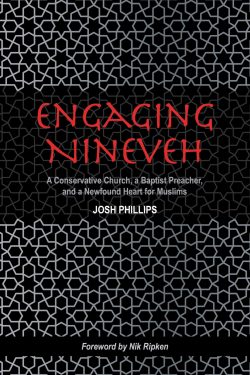 Driving home after a week of course work at Southeastern Baptist Theological Seminary, Josh Phillips was crying. He usually kept his emotions in check, but on this day tears streamed down his face.

He wept because God had suddenly opened his eyes to the “undeniable opportunity” facing him: to love the Muslims who lived in his community and to reach out to them with the gospel of Jesus.

“I felt ashamed that I hated Muslims,” Phillips writes early on in Engaging Nineveh: A Conservative Church, a Baptist Preacher, and a Newfound Heart for Muslims, the story of a transformation of heart, thought and action on his part and his church’s. “I cringed that I only witnessed to people who looked and lived as I did. I felt overwhelmed and ashamed that I was not seeing the mission field in my own community.

“I pulled off the road and begged God for forgiveness. Jesus saved me when I was nine years old, but on that northbound highway, He opened my eyes.”

Phillips had just spent an intensive week in a classroom with missionaries Nik and Ruth Ripken, who told stories about their work in dark places around the world. But what broke Phillips’ heart was Nik Ripken’s suggestion that Phillips and his fellow M.Div. students see the Muslim population around the world — and at home — as a “field of harvest.”

“That was the week God helped me to love my enemies,” Phillips said. “That was when I began loving Muslims for the first time.”

Ripken, writing in the book’s foreword, said the experience constituted a “good, hard look in the mirror” for Phillips. “Josh reveals [in his book] how one can face their own racial chasm — not only seeing Muslims as people for whom Christ died, but journeying until the family of Ishmael become one’s personal friends.”

“Josh’s book is a pilgrimage of hope and love. He combines his storytelling ability, country-boy humor, and faith in Jesus to challenge his readers to travel down the same road, where faith and racism cannot co-inhabit the same heart.

“Josh says that if you believe something, you must do something. A change of heart results in a change of action. One of the strengths of this book is how he always takes others with him for the journey. Where one might expect opposition, Josh finds partners for the journey.”

Phillips’ “partners for the journey” were the members of the church he served at the time, Pleasant View Baptist Church in Port Deposit, Md., who caught his vision for witnessing to Muslims and joined him in outreach efforts. Today, Phillips is senior pastor of Honea Path First Baptist Church in South Carolina.

Phillips’ story is “filled with hope … that the love we find in Christ can be exported to those our culture tells us to ignore, dislike, and expel,” writes Ripken. “In Engaging Nineveh, divisions become family, and people of other cultures and color become friends.”