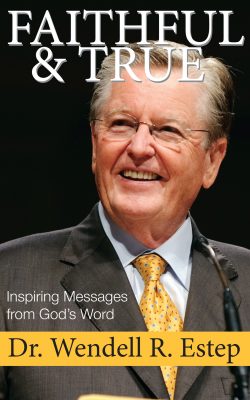 First Baptist Church of Columbia, S.C., has published a book of devotionals based on sermons from Wendell Estep’s three decades as senior pastor: Faithful & True: Inspiring Messages from God’s Word.

Estep and his wife, Lynda, were honored for 30 years of service during the church’s “Evening of Praise” service Aug. 14, 2016, which featured the combined choirs and orchestras of First Baptist Church and Millbrook Baptist Church.

Estep preached his first sermon at Columbia First Baptist on Aug. 11, 1986. When he arrived, the growing church was landlocked and needed more space because its facilities were nearing maximum capacity.

Estep led church members in developing a plan to expand. A new worship center was completed in 1992. Later, the church purchased the Richland County Library and built a recreation and education center on the property, which was named the Estep Family Life Center in 2006 on the occasion of Estep’s 20th anniversary. The church purchased the nearby YMCA building in 2014, which is being renovated and will reopen in 2017 as a youth and student center.

Columbia First Baptist, under Estep’s leadership, has planted five churches, including Village Church in Blythewood, which is pastored by Estep’s son.

Estep worked in broadcasting early in his career and has expanded First Baptist’s TV ministry (which launched in 1953 and is one of the longest continuous broadcasts in the nation) to reach the entire state and portions of North Carolina and Georgia. An estimated 75,000 people watch the church’s worship services on television.

A news release from the church stated that “from the day [Estep] arrived, he has been faithful in giving God complete glory and following His leadership.”

“Wendell’s heart is seeing people come to know Jesus and teaching others to do the same, which will be his eternal legacy in the kingdom of heaven.”

My Daily Word of Truth

7/7: The Key to Understanding the Gospel of John

Essentials for a Healthy Marriage that Will Last Through the Generations

By Eddie and Dawn Leopard