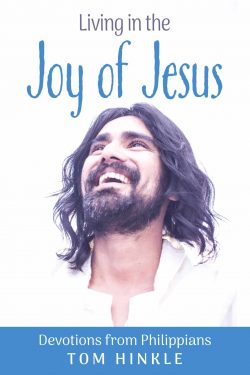 Philippians, one of the four “prison epistles,” was written by the Apostle Paul while in prison at Rome. Philippi was a Roman colony and the first city in Europe where Paul had planted a church. He and Silas had been greatly used in the founding of the church in Philippi.

Paul speaks of his affection for the church and thanks them for their continued support. One of the themes of the book is joy. Paul explained that he is filled with the joy of the Lord even in his current circumstances. He urged the unity of the believers in Philippi as they serve the Lord.

“There is much to be learned from Philippians,” said Hinkle. “Today we certainly need a better understanding of Christ, we need to learn to live in His joy, and we need to be united as believers in Him. It is my prayer that these devotional thoughts will help you to better live out the joyful life that God has called us to live.”

Tom Hinkle has served as pastor of St. John’s Bethel Baptist Church in Moncks Corner, South Carolina, since 2015, and previously served churches in Kentucky for thirty years. He is the author of two previous books: Pondering Proverbs: A Devotional Look at God’s Wisdom (Volumes 1 and 2), and Faith that Works: Devotions from the Book of James.

Living in the Joy of Jesus