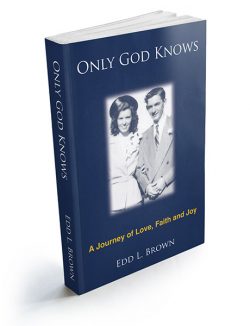 Edd Brown was labeled the runt by family members when he came into the world on the cusp of the Great Depression. His own grandfather predicted that the boy would never amount to much.

In “Only God Knows: A Journey of Love, Faith and Joy,” Brown recounts how he overcame the challenges of his early life — including being struck by lightning as a toddler and growing up in Texas during the Dust Bowl — to serve his country aboard a U.S. Navy fleet oiler during World War II and return home to be a pastor and, later, a pioneer in establishing a statewide men’s ministry program in California.

Now retired and living in Greenville with his wife, Flo, Brown has written a deeply personal account of the “blessed life” he has enjoyed with his wife and four children.

Fermin Whittaker, executive director of the California Southern Baptist Convention, said Brown and his wife are “special gifts from the Lord” whose “ministry in California and around the world is immeasurable.”

The New Testament Fleshed Out Through 20 Asian Servants of God