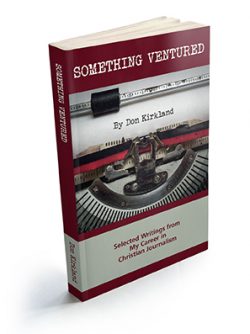 Don Kirkland, editor emeritus of The Baptist Courier, has published a collection of columns he wrote while serving as editor from 1996 to 2012. 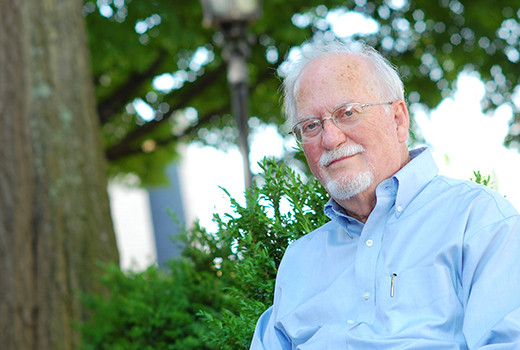 “Something Ventured: Selected Writings from My Career in Christian Journalism” (2014, CourierPublishing, $10, free shipping), includes nearly 70 columns written under Kirkland’s signature “Commentary” heading. While the articles are reflective of the times in which they first appeared, they also address “matters that I believe are timeless and no less relevant now than when originally published,” Kirkland writes in his preface. “I hope my writings will be of spiritual benefit to readers. That was my aim when I wrote them, and now.”

The columns are devotional in nature and draw from Kirkland’s own experiences, including glimpses into his boyhood and his family life, as well as from the writings of others. He even takes inspiration from a country music song or two. As a whole, the writings reflect a life in which the author seeks to follow God “on the right paths.” As individual essays, they stand up as daily devotionals.

Kirkland has a “masterful way with words” that captivates readers, writes Stephen Clyborne, pastor of Earle Street Baptist Church in Greenville, in the book’s introduction. “Though Don was a loyal denominational servant, his words have always lifted us out of the miry clay of denominational politics and focused our attention on our common devotion to the One who unites us rather than on the many issues that could divide us. “Through the gift of his words to us, Don gives us light for the journey of faith, encouragement for those of us who struggle, and simple wisdom to apply to our complex lives.”

Kirkland served The Baptist Courier for nearly four decades, starting in 1974 as assistant editor and rising through the ranks to become editor and president in 1996. He retired in 2012. The son of a Baptist pastor, he was born in Columbia and spent most of his boyhood in Lancaster. He is a graduate of Anderson College, the University of South Carolina and Erskine Theological Seminary. He is the author of four previous books. He and his wife, Linda, are members of Earle Street Baptist Church in Greenville.

Living in the Joy of Jesus