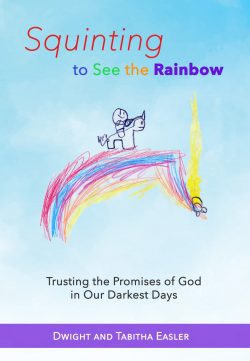 Six-year-old Benji Easler of Gaffney, S.C., died in 2011 when an amusement train ride in a public park derailed and tumbled violently onto a boulder-lined creek bed.

The story of Benji’s death shook the Upstate of South Carolina. Local newscasts led with stories about the tragedy over the next several days. Benji’s parents, Dwight and Tabitha, were interviewed by reporters and spoke about their faith in Christ in the midst of their loss. Thousands tuned in to try to make sense of what had happened. Well-wishers from across the state and from outside South Carolina sent condolences.

But then the TV lights were turned off, and the world moved on, and the Easlers — Benji’s parents, his two older brothers (who suffered broken limbs and lacerations in the accident) and a sister born just weeks after her brother’s death — settled in to grieve the loss of their “delightful, loud and beautiful” Benji.

“Squinting to See the Rainbow: Trusting the Promises of God in Our Darkest Days” is Dwight and Tabitha Easler’s raw and honest account of their family’s journey from unspeakable loss to profound gratitude for God’s faithful presence and comfort.

Dwight said he and his wife wrote the book so that readers might know they can “have hope and live by faith even when nothing makes sense” around them.

He admits he is still broken eight years after losing Benji, and he sometimes is “still darkened by tragedy.” But a God “who intervenes in our darkest days” has sustained him, he writes.

Tabitha describes “a palpable quietness in the house” in the days after Benji’s death, “not just the absence of noise, so much, but the acute and overwhelming awareness that something of vital importance was missing.”

But she also speaks of God’s “protective shield” during her time of loss: “As I trusted Him to get me through those first minutes, hours and days, He faithfully supplied what I needed. Day after heartbreaking day … He was faithfully there, sprinkling His grace through a Scripture verse, a song, a once-forgotten memory resurfacing, or an understanding word or smile.”

The Easlers’ book also addresses the effects of Benji’s death on their other children — brothers Matthew and Seth and their baby sister, Hannah, who never knew Benji but nevertheless has been shaped by her family’s memories of his life and death.

Near the conclusion of the book, son Matthew, writing as a high school senior, invites readers to “trust God in difficult times” and to turn to God “in simple childlike faith.”

“Squinting to See the Rainbow” is available from BarnesandNoble.com, Amazon.com and other online booksellers. The authors are available to speak to groups and can be contacted by email at easler5@aol.com.

From Murphy to Miley

A Carolina Family's Journey of Faith