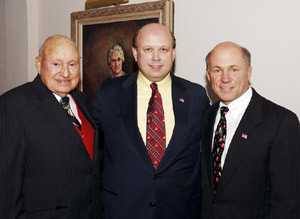 Father and son – Truett Cathy, left, and his son Dan, right, were awarded honorary degrees during fall graduation exercises at Anderson University. With them is Anderson president Evans Whitaker.

The fall graduation at Anderson University featured honorary degrees for a father and son who the university says exemplify the character and vision Christian businessmen should have.

Truett Cathy went from living in a boarding house run by his mother to become the founder of Chick-fil-A, one of the most successful restaurant chains in America, with annual sales of $1.75 billion and more than 1,200 locations. His son Dan, who now heads the company as CEO, has continued to grow the company while holding fast to the Christian values on which the company was founded. Father and son were presented with their honorary degrees together – a first, according to the Cathys.

Anderson University president Evans Whitaker lauded the Cathys for their servant leadership and their firmly held Christian witness. Truett Cathy held firm to the belief that his stores should remain closed on Sundays so that employees could spend time with their families and at their houses of worship. His son Dan has maintained that commitment.

Truett Cathy has also invested much of his time and fortune in young people – teaching boys in Sunday school for more than 50 years, while establishing a group of foster care centers in Georgia. Cathy himself has had 150 foster children.

“The two men being honored today live out the very principles that lie at the core of our purpose as an institution,” Whitaker said.

“In our stated purposes and goals, we emphasize the value in preparing our students for a rewarding life. As the goal under that listed value, we affirm that we strive to emphasize the rewards of a life characterized by balance, discipline, service to others and Christian discipleship,” he continued. “These two men are perfect examples of the kind of Christian commitment in business that we teach here at Anderson University.”

For their part, the Cathys were visibly moved by the recognition from Anderson. Truett Cathy greeted graduates as they crossed the stage, and Dan Cathy made an impromptu speech, exhorting the crowd to remain faithful to the teachings of Christ, no matter what field each audience member found himself or herself in.

Dan Cathy has agreed to serve in an advisory capacity as Anderson University develops a center for Christian ethics in business.