Even before the first word was said or the last song was sung, Marshall Fagg, new evangelism leader for South Carolina Baptists, knew what he wanted to accomplish at the state evangelism conference held Feb. 27-28 at Trinity Baptist Church in Cayce. 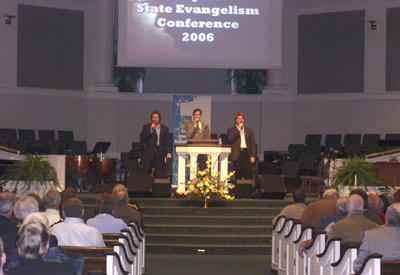 Lifting voices and spirits — The Booth Brothers perform at the opening session of the State Baptist Evangelism Conference.

“We wanted this year’s conference to be a time of inspiration for pastors, staff and lay people,” he said. “The church is moving from an age of information to inspiration as the primary means of motivating members to evangelism, missions and ministry.”

“Hopefully,” he added, “this shift will refocus the priority of the church from programs to people.”

And more, “We also wanted everyone to have a good time, to be lifted up and to leave excited about the work of the kingdom of God. The Christian life was never meant to be drudgery, but a joy.”

Conference speaker Phil Hoskins could not have agreed more, telling the large audience, “It will be a great day when Southern Baptists stop enduring Christianity and enjoying their salvation.”

In addition to Hoskins, Jamey Ragle, John “Bull” Bramlett and Don Wilton brought messages. Wilton, state Baptist convention president, filled in for Junior Hill, who cancelled his closing message due to the death of his brother.

Opening his first evangelism conference, Fagg declared, “We’ve all got a story to tell, so go out there and tell somebody your story,” and later prayed that God would “remind us how good” the story of salvation through Jesus Christ is.

Addressing the conference in his role as convention president, Wilton said that South Carolina Baptists need a “fresh understanding” of what it means to introduce others to Jesus. “There is no substitute,” he said, “for simply walking up to someone and asking, ‘Would you like to know Jesus?'”

The conference, which drew an estimated 1,500 people for the Monday evening session, also provided a forum for promoting “The Goal of One” and the Men’s Fraternity program, which state men’s leader Bobby Jackson said reflected a spiritual hunger among men and their quest for what he termed “authentic manhood.”

Earlier, Fagg noted that 2006 is a pivotal year for evangelism in South Carolina. “With the early success of the ‘Goal of One,’ I am convinced that it is possible for every one of our churches to baptize at least one person, and for our state to have a record year in baptisms,” he said.

Challenging Baptists to “seek first the kingdom of God,” Ragle, who delighted the audience with his humor, said that the kingdom “won’t just fall into your lap.” He said that seeking the kingdom requires avoidance of “distractions and detractors.”

He advised kingdom seekers, “Trust God completely, and surround yourselves with people who want you to succeed.” 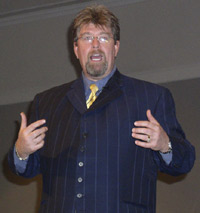 Good humor man — Jamey Ragle made good use of humor to make serious points in his messages.

Ragle warned against self-absorption. “Everybody’s favorite subject is themselves,” he said, “but this is the opposite of what scriptures say.”

Declaring that “you can find more egos at a meeting of the Southern Baptist Convention than at the Emmys,” he cautioned, “We’re going to get into trouble when we begin to believe our own press.”

“It’s not about us,” he said. “It’s about people getting saved.”

He pointed out that the church cannot afford to lose three things: its convictions based on the teachings of the Bible, its character and its compassion.

“Everyday,” he said, “our characters are tested. The devil knows your weaknesses, what will set you off.”

He identified compassion as a “missing ingredient” in the lives of many church members. “People do not care how much we know,” he said, “until they know how much we care.”

Bramlett, a former star athlete, spoke of growing up “in church, but not in Christ,” explaining, “There is a big difference between being in Jesus and being in church.”

Formerly a professional football and baseball player, he abused alcohol and drugs until “God got hold of this drunk 30 years ago and I have never been the same.”

He credited a visit by Christian men as helping him turn his life around. “They told me, ‘We came by because we love you.’ I had never known what love was.”

Bramlett was prompted to “pour all the alcohol out, and I began reading the Bible, all night and the next day. When I got to John 3:16, I realized that Jesus died for me. I’m a ‘whosoever.'”

In the closing message of the conference, Wilton described evangelism as “our commission.”

Wilton told his audience, “No one is good enough to be saved, and no one is so evil that they can’t be saved.”

Earlier, as he spoke to the conference as convention president, Wilton praised South Carolina Baptists as “the most precious people on the face of the earth” – a people with a sense of purpose and a mission “to reach people for Christ to the ends of the earth.”

South Carolina Baptists, he said, have “great strength together” and must take care to preserve “the precious jewel of unity” that exists within the state convention.

Turning his thoughts to support for mission causes through the Cooperative Program, Wilton said that his church, Spartanburg First, was about to boost its CP contributions by 2 percent and added, “If every church would increase its Cooperative Program giving by 1 percent, you would be amazed at what God would do.”

Noting that South Carolina Baptist churches vary in size and financial strength, he emphasized, “It’s not about equal giving, it’s about equal sacrificing. It’s each church doing what we need to do – cooperatively.”