Ironically, production of “The Nativity Story” took about as long as the period of time the movie portrays – from just before Christ’s immaculate conception to just after his miraculous birth. That such a breakneck production schedule actually worked and the movie opens Dec. 1 is its own little miracle, the film’s producers say. 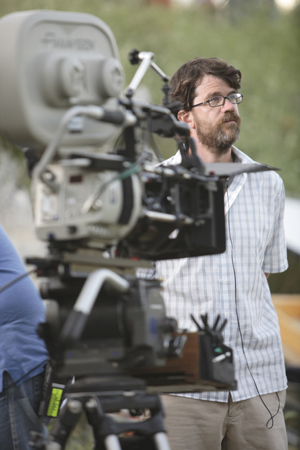 Producer Wyck Godfrey works on a scene in “The Nativity Story.” Godfrey says getting the film right – historically and biblically – was their “sole intention.”

“It’s the fastest movie from soup to nuts that I’ve ever been involved with,” producer Wyck Godfrey said in a telephone interview with Baptist Press.

Godfrey, 38, who has produced recognizable movies like “Daddy Daycare,” “I, Robot” and “Behind Enemy Lines,” didn’t begin his work on The Nativity Story until March of this year.

Bowen had been a talent agent with United Artists Agency. One of his clients was writer Mike Rich, an award-winning screenwriter (“The Rookie,” “Radio,” “Miracle”) and devoted believer.

Bowen had encouraged Rich to explore writing a biblical story. “Write what’s important to you,” Bowen told him. Soon, he learned of Rich’s plan to write a screenplay on the birth of Christ. Bowen mentioned it to Godfrey, who said half-joking that he’d quit his job to produce the movie.

Godfrey recalls, “Six months later (Bowen) called and said, ‘Well, here it is – you want to quit your job to do it?’ It was God knocking me on the head, going, ‘All right, this is your chance.’

“I’d had a great run with my old company and made a bunch of movies for my old boss, and had growingly felt that it’s either time to make the movies that will define you or just work for him forever.”

Godfrey got that call from Bowen in December 2005, left his job in March 2006 and was on a plane the next day to Italy, where the film was shot.

Bowen had shown the script to New Line Cinema (“The Lord of the Rings”) in February. They embraced it instantly and wanted it for this Christmas, an almost unheard-of deadline in a business where films can take years from start to finish.

Why was this particular film so attractive to Godfrey that he would quit his job, start a brand new company and begin a whirlwind production and promotion schedule?

“It was kind of a dream come true,” he said.

Godfrey grew up in a devout Christian home in east Tennessee where he went to church “four times a week.” After going away to college and getting involved in the film industry, he drifted away from the faith. Then about 10 years ago, he got married and started a family, milestones that he says drew him back to his roots.

“I wanted to teach my children the right way to be. I went back to the tenets of Christianity as a moral and ethical way to live. My 30s have been a lot closer to God than my 20s were, and I’m hopefully getting closer every day.”

Not that being a Christian in Hollywood is without its challenges.

But he senses that it’s beginning to change.

“It’s become a better place in the last few years because of the success of (Mel Gibson’s) ‘The Passion of The Christ,’ and I think sometimes Hollywood catches up to the rest of the country about five years after.”

Since the movie’s writer and producers are Christians, biblical accuracy for The Nativity Story was of utmost importance.

“That was our sole intention – to get it right,” Godfrey said. “From a script standpoint, Mike (Rich) really focused on just the scripture and looking at areas where in between the scripture you could insert extra-biblical stuff that wouldn’t be an affront to the scripture.”

In addition to biblical accuracy, the filmmakers strived for historical authenticity as well, hiring Jewish scholars to dictate everything from costuming to food to when the characters should pray and wash their hands.

They also involved historians to consult with them about architecture and King Herod and his relationship with the Romans.

They even enlisted a dialect coach, Jessica Drake (“Memoirs of a Geisha”), who took actors from all over the world (France, Morocco, Africa, England) and worked with them tirelessly for weeks to give them all the same dialect – something she called ancient Middle Eastern Hebrew.

Godfrey said they paid such attention to detail because the subject matter was so important.

“For the writer and Marty and me – we felt it from the beginning,” he said. “This is something we had to write. We wanted it to be scriptural. We wanted the movie to reflect well on God.”

Godfrey said even though the actors were diverse, the weight of the material was sometimes palpable on the set.

“We had actors from every religious background – Catholic, Muslim, everything. Yet the spiritual tenor of the set was really still when we had the scene with Mary returning home pregnant and having to face her parents. And you could hear a pin drop on the set when we were shooting the scene with Christ’s birth.”

What about audiences? How have they been responding so far?

“Fantastic,” Godfrey said. “I don’t think any of us could’ve hoped for a more enthusiastic response – across denominations. And even more secular screenings have gone really well.

“People really have embraced a realistic portrayal of these two people and their story and the love that developed. It’s been really gratifying.”

Similar to the lead-up to The Passion of The Christ, many churches are hosting private screenings of the film, or are at least encouraging their members to go.

Such audiences are a relatively untapped market in Hollywood, something Godfrey sees changing. He also envisions Temple Hill Productions doing similar projects in the future – they’re currently looking into doing a film on the life of the apostle Paul.

“More and more companies in Hollywood are putting people in charge of these divisions – there’s a real desire to appeal to an evangelical audience.

“We’re relying on our audience being the ones to tell people, ‘This isn’t cynical Hollywood chasing a dog. This is truly a spiritual, emotional movie,’ and hopefully that will connect with people.”