Quick. Which college football team has the longest NCAA Division I winning streak in the nation? 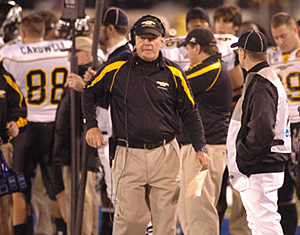 It’s not Boise State. It’s Appalachian State in the Football Championship Subdivision (FCS – formerly known as I-AA). While all that might be a tad bit confusing, one thing is clear. The Appalachian State Mountaineers are on a roll. They won their final 14 games of the 2006 season – including the title game against Massachusetts – to take home their second straight NCAA Division I FCS national championship.

Jerry Moore was at the helm for both national titles. In fact, he’s been the head coach at ASU for the past 18 seasons, during which he has amassed an incredible 154-68 record. He is the winningest coach in Southern Conference history. And recently, for the second straight season, he was named the American Football Coaches’ Association (AFCA) FCS Coach of the Year. But he’s quick to downplay praise at the mention of such honors.

“They must not know what they’re doing,” Moore said with a laugh.

One thing you won’t find Moore joking about is his faith.

His journey began like many other people who go to church and hear about Jesus, but never place their faith in him. He entered his adult years not knowing whether he was a Christian or not. He played football at Baylor, where he met his wife Margaret, from 1958-1960, and by 1965 he landed his first college coaching job as an assistant at Southern Methodist University. He coached there until 1972.

Then he moved on to Nebraska, where he was the offensive coordinator from 1973 to 1978. He got his first chance to be a head coach in 1979 when he took over at North Texas. After coaching there for two years, he became the head coach at Texas Tech from 1981 to 1985.

“I got fired at Texas Tech in 1985,” Moore said. “We lost four balsams by a total of six points. It was probably one of the most devastating things that happened to me in my career because I’d never worked as hard. When I left Tech, somebody – and I have no idea to this day who it was – put a series of Charles Stanley tapes about success on the front seat of my car that I drove to Dallas to go to work for a mortgage company for about 14 months. I didn’t even know who Charles Stanley was, but I listened to the tapes and began to think, ‘Hey, this guy makes pretty good sense.'”

Moore outlined all the tapes in that series. He still has the outlines on the paper he originally wrote them on. It’s folded up and stashed safely in the back of his Bible. Moore and his family eventually ended up in Atlanta, where he attended Charles Stanley’s church, and for the first time, his faith became genuine.

His desire to go deeper in the scriptures grew, and while he was an assistant coach at Arkansas in 1989, one of his friends gave him a book called “Words of Wisdom.” It’s a 31-day devotional that only includes the words of the Psalms and Proverbs – broken down into daily readings of five psalms and one proverb. He still uses it to this day. He has even taped pictures of his relatives and friends throughout the book so he can remember to pray for them.

“When I get up in the morning, I’ll pour myself a cup of coffee and I won’t read a newspaper,” Moore said. “I won’t watch the news. I won’t read a flyer that may be laying there. I won’t read anything until I’ve read my five psalms and one proverb. I haven’t been a hundred percent, but I’ve started nearly every day that way since 1989.”

He has given “Words of Wisdom” to hundreds of his players over the years, and he can easily recite one of his favorite quotes that he inscribes in each copy before he hands it to them: “Let the first moments of the day when the heart is fresh be given to God. Never see the face of man till you have seen the King.”

Moore also seeks to spiritually nourish his players and coaching staff by bringing in Christian speakers occasionally. Last October, after one speaker presented the gospel to the team, 57 players and one coach either placed their faith in Christ for the first time or made a recommitment.

And, as you might imagine, Moore wrote down all 58 names in his “Words of Wisdom” book, and he prays for them regularly.