Sherzod Odilov, an exchange student from Uzbekistan, did not anticipate the high price he would pay for his decision to follow Christ, but knowing the price Christ paid for him, he stands firm. 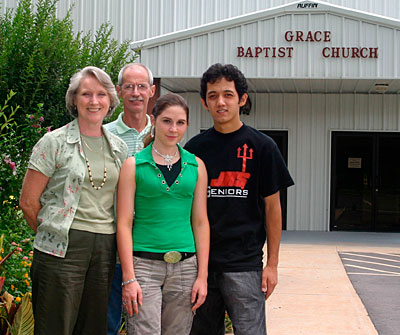 When Sherzod, who recently graduated from Jacksonville (Ark.) High School, telephoned his Muslim parents in Uzbekistan to tell them of his newfound faith, his father disowned him, making it clear he was no longer welcome in his home and was never again to speak to his mother or his siblings. He withdrew all funds from Sherzod’s U.S. bank account, arranged to cancel his son’s U.S. sponsorship and college scholarship, and even drew up legal papers declaring Sherzod is no longer his son.

As devastating as that must be for an 18-year-old, Sherzod remains strong in his commitment to Christ.

He faces his uncertain future with confidence that God will lead him.

Sherzod was led to faith in Christ by Kari Hand, 16, who befriended him and introduced him to the Savior.

“I was strictly Muslim. I prayed five times a day and read the Koran and learned it by heart. I kept it with me all the time,” Sherzod said. “All I knew was Islam, and I believed in Islam. I really prayed. I thought all religions except Islam were wrong.”

Then he met Kari at a basketball game.

As time passed, Kari’s testimony and witness began to reach him.

“I got used to that and started to feel something whenever she talked about that,” Sherzod continued. “I asked a lot of questions of her, everything about Christianity. I asked them on purpose to see if she could answer or not. She did. She could answer those questions, and that really surprised me.”

Sherzod began attending Grace Baptist, where Kari is a member. He liked the church, the people, pastor Jerry Terrell and the youth group.

Then one day while Kari was on the phone with him, she asked if he was ready to accept Christ.

“That really touched my heart, too, because I had been wanting to do that for a long time, but I didn’t know how to start. I didn’t really know how to do that. So, I said, ‘Okay, what am I supposed to do?’ “

Kari, who had been trained in Evangelism Explosion, guided him through what it means to confess sin, repent and place his trust in Jesus Christ alone for salvation, and Sherzod responded by praying to receive Christ.

In conversations with Terrell about seeking baptism, they decided he should share his decision with his parents.

Sherzod said his parents had always shown their love for him, met his needs and supported him in every way. He thought they would support his decision. He phoned them on his dad’s birthday.

“I said, ‘Dad, I have to tell you something very important. It’s very important to me and it’s a big change, and I hope you are not going to get mad or upset with me,’ ” Sherzod told him.

His father told him he could never be angry at anything Sherzod did.

“I told him I accepted Christ and that I’m getting ready to get baptized,” Sherzod said. “He kept silent for a couple of minutes. I said, ‘Dad, are you okay?’ and he said, ‘Sherzod, I don’t think the thing you are doing is right, and I didn’t really expect that from you. If you are sure the thing you are doing is right, and if you are not going to follow Islam, there is no hope for you to come to Uzbekistan. If you ever come to Uzbekistan, don’t ever come to my house. I don’t want you to talk to your brother or sister or to Mom or to any other relatives.’ “

Terrell speculated that the father’s decision may have been motivated by love and fear. Uzbekistan is 88 percent Muslim. Sherzod’s father may have feared for Sherzod’s life and for the lives of his family.

“I don’t blame his parents or anyone else, and I don’t want him to hold anything against his parents,” Terrell said. “They are loving parents. They have done what they believe is the best thing to do. We just need to gather around this young man and help him.”

Terrell baptized Sherzod June 24, and Grace Baptist has made a commitment to assist the young man with financial and legal responsibilities as he seeks religious asylum in the United States.

They have filed for an F-1 visa, which will allow him to stay as a student. He had already been accepted at the University of Central Arkansas at Conway, where he will major in international relations and political science. But without his Uzbekistan scholarship, the university needed a guarantee regarding his financial support, because an F-1 visa does not allow him to work. Doing so would mean deportation.

Terrell presented the need to the church and they voted to sponsor Sherzod for tuition, room and board, books and spending money. Yet, such a small church (about 150 resident members) knows they will need help.

“Religious asylum is the ultimate goal,” Terrell said, but many people are filing for those and they are difficult to obtain. Also, the cost is about $4,000.

“But we believe with God’s help, anything is possible,” Terrell said. “So far the Lord has really inspired everything that has taken place. I believe God is in this.

“I’ve been really proud of Sherzod,” Terrell said. “Even after these things have all taken place, he continues to say, ‘I believe I’ve done the right thing. I stand by my decision. This is what I believe.’ He’s been strong in that. It has really been an inspiration to our teenagers, and our adults also, to meet someone who stands strong, realizing the price he has had to pay. God has really blessed us by bringing him to us.”