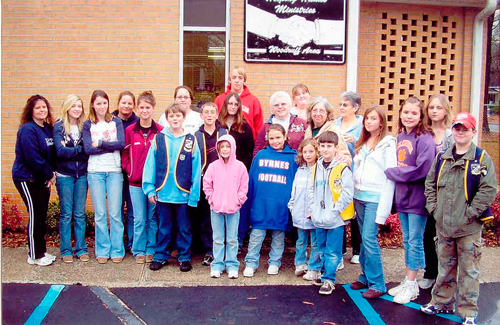 The RAs and GAs from Cedar Grove Baptist Church, Woodruff, stand in front of Helping Hands Ministries in Woodruff, where they did volunteer work on the first day of their Christmas break. The group also collected cans, clothes, and other non-perishable items to donate. 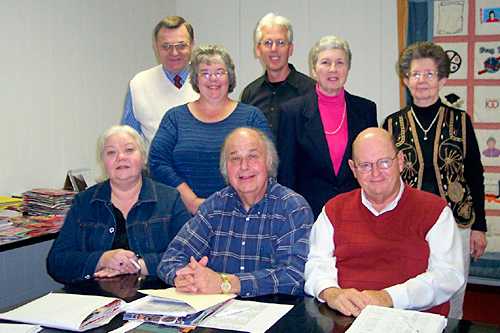 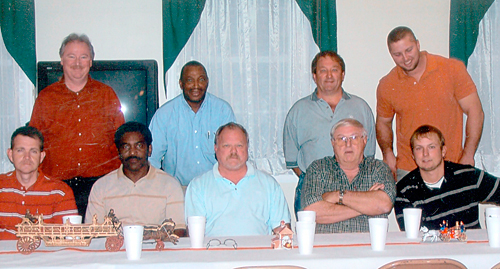 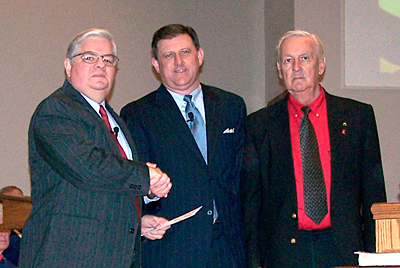 Ben Davis, left, president of Connie Maxwell Children’s Home, was guest speaker at Apalache Baptist Church, Greer, Feb. 10. The congregation recently amended their budget to include Connie Maxwell in their missions giving on a monthly basis. Eddie Cooper, center, pastor at Apalache, presented Davis with a check. With them is Charles Smith Sr., finance committee chairman. 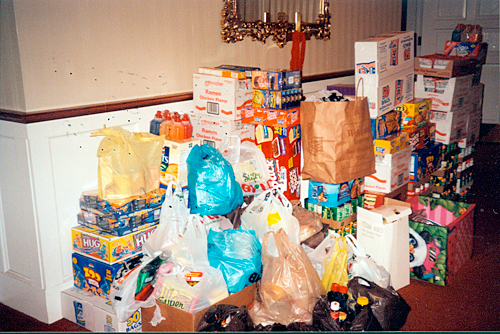 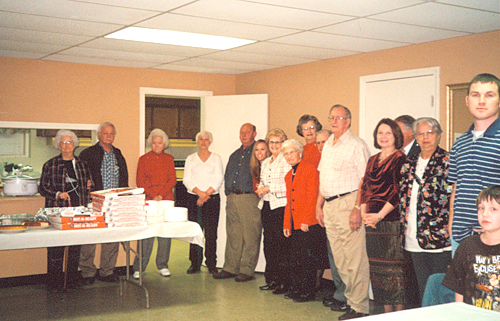 Members of Big Creek Baptist Church, Williamston, collected 2,200 food items for Operation Care, Palmetto Baptist Association’s food bank. Each year, Big Creek holds a contest between the men and women to see which group can collect the most food items. The winners are served by the losing team during “Souper Bowl.” This year, the women won, bringing 1,219 items and the men brought 981. 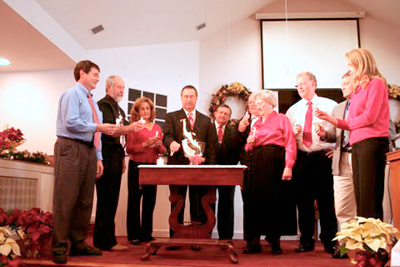 The congregation of Corinth Baptist Church, New Ellenton, celebrated paying off the church debt last December by burning a copy of the mortgage on the new sanctuary.?Brancie Stephens, former pastor, shared his experience and involvement in the construction. Current pastor Roy Morgan shared his vision for the future. Participating members of the building committee included chairman Paul Johns,?Rick Willard, Ann Key, Steve Harris, Tim Thomas, and Don Glover. Standing in for Millie Hubbs and Bill Braswell, former committee members who are now deceased, were Bonnie Goggans and Deborah Braswell Thomas. 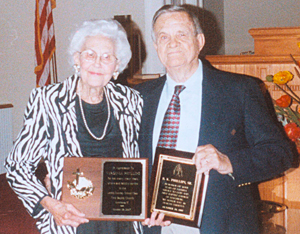 Virginia and Keith Phillips were recently honored by First Baptist Church, Lynchburg, where they have been active members since 1954. She has served as a Sunday school teacher, and both have served the church in many other capacities. He was named deacon emeritus during the recognition. 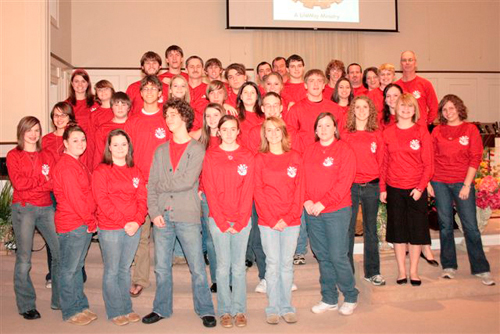 The youth of Whitefield Baptist Church, Belton, recently participated in the annual True Love Waits weekend. They studied the book, “Revolutionary Purity,” during Sunday school and finished the study during the weekend. Tommy Henderson, interim youth director, and Jeremy Sargent, Oak Pointe preaching pastor, led the continued study on the subject of purity over the weekend. The group also attended the Winter Jam concert held in Greenville. On the following Sunday night, the youth praise band led the worship service and many of the youth shared testimonies, while adult leaders Jason Alewine and Mike Guest gave the church body a summary of the weekend activities. 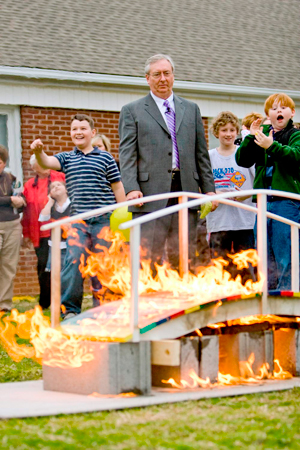 Harris Baptist Church, Greenwood, celebrated paying off the $500,000 loan on its preschool building and renovation of the children’s wing Feb. 17. Instead of the typical “note burning” ceremony, the church burned the bridge used to keep track of the progress of the campaign. “We are burning our bridge behind us and moving forward to the next phase of construction, which will be a new social Hall and administrative office complex,” said pastor Frank Thomas, who, along with several children of the congregation, watched the bridge burn. 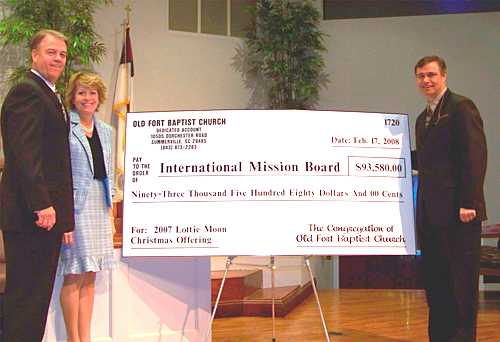 Old Fort Baptist Church, Summerville, delivered a check for $93,580 to the International Mission Board Feb. 17. The money was gathered through the Lottie Moon Christmas Offering. Gib Gerlach, IMB church mobilization consultant, Southeast Region, received the check on behalf of the IMB. Pastor Eric Lethco, right, presented the check to Gib and Chris Gerlach on behalf of the Old Fort congregation. 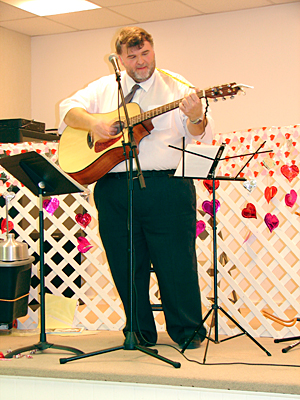 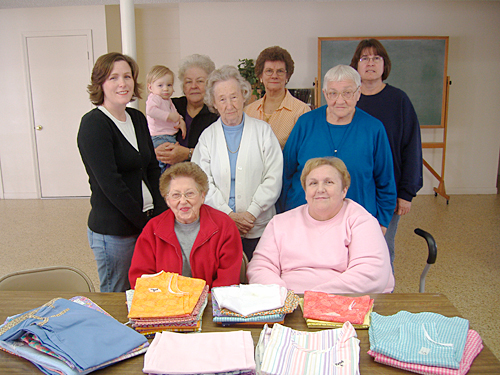 The Woman’s Missionary Union at St. Matthews Baptist Church, St. George, made dresses for Children Hemmed in Prayer, a mission sewing project out of Phenix City, Ala., which makes and accepts handmade dresses, prays over them, and sends them to girls in need in foreign countries. In the past, dresses have been sent to girls in Central America, Mexico, China, Guatemala, Haiti, Honduras, Bahamas, Uruguay and the Dominican Republic. Betty Fisher, former WMU assistant director, discovered the ministry last spring and presented the idea as a missions project. During the summer, WMU members got together and spent a couple of hours cutting out fabric for the dresses. They divided the cut-outs and sewed them at their homes. Although the group’s original goal was 25 dresses, a total of 61 dresses were sewn. Participants included Rhanna Braden, Katie Brickle, Ray Campbell, Leslie Dixon, Dorothy Duncan, Betty Fischer, Mary Fisk, Judy Gruber, Mary Pearl Pulaski (WMU director), and Molly Woodberry. Fabric was supplied by Betty Brown, Birnell and Mildred Gruber, Wendell and Delores Harbeson, Dean and Connie Jackson, Sadie Francis Murdaugh, Bernie Wiggins, and Thelma Windham. 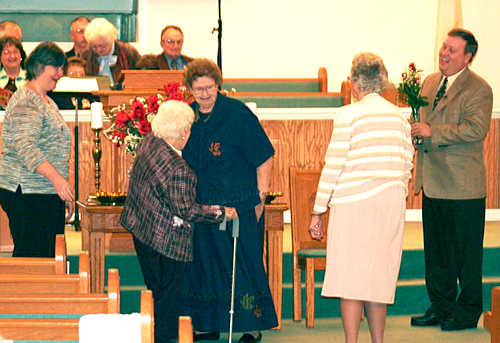