Seth Condrey was recognized at the 2008 Gospel Music Association’s Dove Awards for Spanish Language Album of the Year with “De Corazon a Corazon.” The former North Greenville University student has taken an unexpected route to being an award-winning musician. 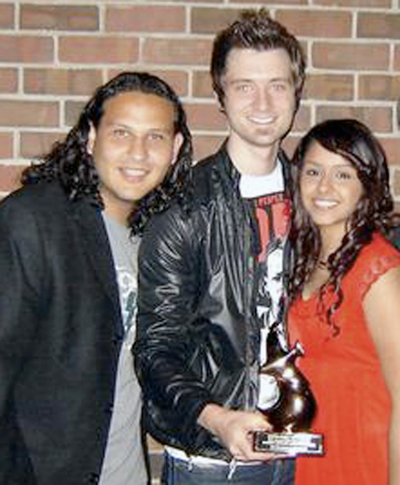 Buitrago stands with Seth Condrey and his wife Jessica backstage at the Dove Awards.


Before the winners were announced, Condrey told the Atlanta Journal-Constitution that just the nomination has encouraged him in his ministry.

“I never even thought I’d be nominated for a Dove, and that’s still soaking in,” he said. “I’ve struggled a lot with the confirmation that this is what I’m supposed to do. Once this happened, it helped confirm that there’s a plan, there’s something that’s going to happen eventually. It’s just being patient. It’s a little sign from the Lord.”

Another “sign from the Lord” may have been Condrey’s family housing a 17-year-old Venezuelan named Charlie Buitrago.

“When I first moved in with Seth’s family, I was only 17. He was 13. He didn’t know how to play guitar. I did, and I helped him out with the guitar skills,” Buitrago told Skyliner writer Jon Harris. “The cool thing is, we just did worship in the church, and they let us play in some places like coffee houses. We were just teenagers.”

Buitrago came to North Greenville University and Condrey followed. “He ended up coming to school with me here. I stayed, graduated and after that, we started touring,” Buitrago said.

He writes songs and plays on stage with Condrey. Both are signed to the largest Latin Christian label, CanZion Records, out of Houston, Tex. “When we put the album together, you never think about this stuff (awards),” said Buitrago, who accompanied Condrey to the Dove Awards.

Prior to winning the award, Condrey expressed his feelings about his budding recognition. “I don’t consider myself the greatest guitarist in the world or the best singer. I just feel like God’s blessed me with enough talent to go out and make a statement about some good stuff,” he said.

Buitrago plays music full time with his band Poiema and leads Wednesday worship for the youth at Mount Airy Baptist Church in Easley.

When he is not touring, Condrey leads worship at Watermarke Church in Kennesaw, Ga., and is working on a new Spanish-language worship program at North Point Community Church in Alpharetta, Ga.