An emotional Dabo Swinney took to the TV microphones Dec. 1 and spoke openly of his Christian faith at a press conference to announce his hiring as Clemson University’s 25th head football coach. 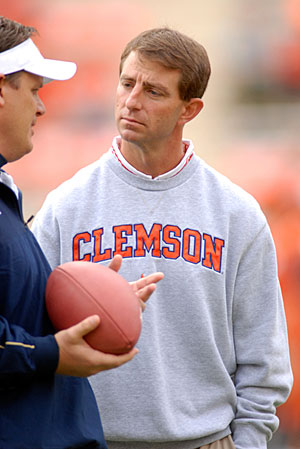 Dabo Swinney talks with Georgia Tech head coach Paul Johnson while their teams warm up before an Oct. 18 game at Clemson’s Death Valley.

“There’s really only one reason that an old boy from Pelham, Alabama, is sitting here in front of you today, and that’s the grace of God,” Swinney told an audience of university supporters and sports journalists. His remarks were televised live to thousands of Upstate residents who tuned in for their local 6:00 newscasts.

“To be here as the head coach at Clemson, that doesn’t just happen,” the 39-year-old Swinney said. “I hope people will really listen to me when I tell them what my secret to success is, and that is to put your eyes on the Lord in everything you do, and believe in yourself, and don’t quit.

Swinney was named interim coach in midseason after former head coach Tommy Bowden resigned. Swinney led the Tigers to a 4-2 record and a victory over arch-rival University of South Carolina. The Tigers will play in the Konica Minolta Gator Bowl on New Year’s Day.

During his 48-day tenure as interim head coach, fans and pundits speculated freely on sports radio shows about who Clemson’s next coach might be. Swinney was never sure he would be the university’s choice.

One morning in the midst of the uncertainty, Swinney pulled his car into the head coach’s parking space. In the predawn darkness, his headlights illuminated the parking space’s number – 88 – the same number he wore when he was a wide receiver at the University of Alabama. He took it as a positive sign. “It was kind of like God was saying, ‘Hang in there, I’ve got your back,’?” he said, then he paused to regain his composure 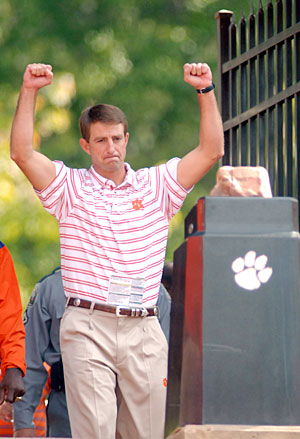 Dabo Swinney, in his first game as interim head coach, approaches “Howard’s Rock” before leading the Clemson Tigers down the hill prior to kickoff against Georgia Tech on Oct. 18.

On Tuesday morning of the week leading up to the South Carolina game, “as I knew this thing was coming to an end, not knowing what was going to happen,” Swinney said he received an e-mail devotional that included a scriptural reference to Revelation 3:8.

“For I know what you have done,” Swinney said, recalling the verse from memory, “and I have opened a door for you that no one can shut.”

Swinney said that when the same e-mail showed up two days later, “I just had a real peace about this whole thing.” He decided to share the verse with his players at a “little Thanksgiving service” that morning.

Swinney attends New-Spring Church in Anderson with his wife Kathleen and their three sons, Will, Drew and Clay.

Rudy Gray, president of the South Carolina Baptist Convention and pastor of Utica Baptist Church in Seneca, located seven miles from the Clemson University campus, said it is an “encouraging sign when people in the public arena unashamedly give a clear testimony of their faith in Jesus Christ.”

“I have heard Dabo Swinney’s story, and it is inspiring,” Gray said. “He experienced personal pain and adverse family circumstances while growing up, but came to a saving knowledge of Jesus Christ that turned his life around.

“His enthusiasm and energy are obvious. He will now have a tremendous platform through which he can honor Christ in what he does and how he lives.

“As Christians, we should pray for him and ask God to give him wisdom for the challenges and opportunities before him.”