No one in the remote West African village wanted to be the first to follow Jesus. The choice could mean losing family, home, job, friends, children – everything the Vigue people hold dear. 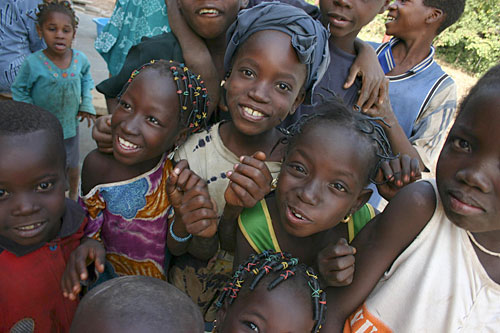 Vigue children crowd around one of the volunteers from Bartlett (Tenn.) Baptist Church as she snaps their picture. Bartlett members hope to start evangelical churches in each of the 12 Vigue villages in Burkina Faso.

More than 8,000 Vigue (vee-gay) live in southern Burkina Faso scattered among 12 villages. Poor by Western standards, they live without electricity or running water, surviving as farmers. A mixture of Islam, spiritism and ignorance shields their hearts from the gospel. Until recently, there were no known Christians among the Vigue.

That changed last year when short-term missions teams from Bartlett Baptist Church in Bartlett, Tenn., began to visit the Vigue and share the story of Jesus. The church is partnering with the International Mission Board to take the Good News to the Vigue because there are no full-time missionaries available to reach them.

Becky Babcock, director of missions at Bartlett, said virtually all the Vigue encountered by the church’s missions teams know nothing of the gospel. Since most Vigue cannot read or write, teams work with translators to tell oral Bible stories. God used Babcock’s own witness to lead the first Vigue to Christ – a woman named Safi who accepted Jesus as she and Babcock sat in the shade under a tree in Safi’s compound.

“Jesus came to wash my heart clean,” said Safi, spontaneously breaking into song about the strength of Jesus and her love for him. “I am strong because of Jesus. I believe.”

Safi’s salvation is just one of the victories recorded in the IMB’s Annual Statistical Report for 2008.

Last year the Vigue were one of 101 people groups newly engaged by Southern Baptists and their national partners. This means no one was previously working to start new churches among them. These newly engaged people groups have a combined population of more than 188 million, and nearly all are considered unreached (less than 2 percent evangelical Christian).

These groups are part of more than 1,190 people groups overseas currently engaged by Southern Baptist missionaries and their partners – partners such as Babcock and Bartlett Baptist Church.

Missions has always been a way of life for Babcock, who grew up in West Africa as a missionary kid. When she wasn’t in school, she helped her parents minister to their African neighbors.

“I felt just as called to the mission field as my parents,” Babcock said. “I helped with backyard Bible clubs in our compound in Sierra Leone and helped teach adult literacy with my mom. In boarding school, I went on weekly evangelism trips and special mission trips on the weekends.”

Becky Babcock, director of missions at Bartlett Baptist Church in Bartlett, Tenn., helps Vigue women in Burkina Faso prepare a meal as part of outreach to the unreached people group.

Two years ago, she pitched the idea of Bartlett working with the Vigue people to her pastor, Michael Priest. With help from Southern Baptist missionaries David and Tami Wood, Bartlett soon became an “engaging” church, responsible for sharing the gospel and making it accessible to the Vigue.

“It is the church’s responsibility to go and make disciples. So we must go, and we must go to those who have no access,” Babcock said.

During the past two years, Bartlett has sent out seven short-term missions teams to work with the Vigue. They know it takes time to build relationships and trust.

“Each team going to the same area and continuing the work among the Vigue at different levels gives a sense of consistency within our church and among the Vigue people,” Babcock explained.

Matthew Hargrove, who has been on several Bartlett mission trips to share Bible stories with the Vigue, believes God commands all Christians to go and share the gospel.

“My wife and I had been talking about whether or not those who never hear the gospel would go to heaven. … The Bible makes it clear that there is but one way to the Father, and that is through Jesus,” Hargrove said. “We then began talking about how it is our responsibility to take the gospel to them.”

Hargrove was there when both the Vigue chief and his son became believers.

“It changed my life forever, and I definitely look forward to going back,” Hargrove said.

Today, there are 13 believers among the Vigue. The chief has granted permission for Bartlett members to come as often as possible, even setting aside a special house for them when they visit.

As the chief told one volunteer group: “If you put a church in my village, I will give you my children to teach them.”