University of Florida quarterback Tim Tebow has added to an already impressive collection of national football awards, garnering the 2008 Wuerffel Trophy, the Maxwell Award and the Disney Spirit Award. 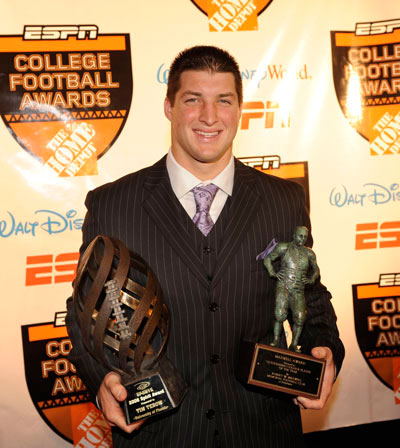 Tebow is a member of First Baptist Church in Jacksonville, where his parents, Bob and Pam Tebow, are longtime members and, as missionaries to the Philippines, head up the Bob Tebow Evangelistic Association.

A college junior, Tebow, who last year was the first sophomore to win the Heisman, college football’s most prestigious honor, finished last among this year’s three finalists but had the most first-place votes.

The 1996 Heisman winner, Danny Wuerffel, notified Tebow Dec. 11 that he had won the trophy named for Wuerffel, which is awarded to the college football player who best combines exemplary community service with athletic and academic achievement.

“Without question, you completely deserve this award and I am so excited to announce that you’re this year’s winner,” Wuerffel, himself a decorated former University of Florida football player, said to Tebow the morning he was informed of the award, as recounted in a news release.

“It was just amazing to see the success that Tim has had in all three aspects of this award: academically, athletically and in the community and service to other people,” Wuerffel continued. “He’s just an amazing young man, an amazing football player. I’m just so incredibly proud to have him (as the winner). It’s funny how things go back and forth. Maybe one day my son will win the Tebow Trophy.”

Tebow told Wuerffel he was humbled by the award.

“To win the SEC championship is a dream come true and then to get this award – Danny’s award – is just great; it’s very humbling,” he said, according to the news release. “I want to take this platform that I have by being a quarterback and being at the University of Florida and use that to share my message about helping people’s lives. That’s the reason I think I’ve been blessed to have the success that I’ve had.”

Tebow, who will lead Florida against the Oklahoma Sooners in the Jan. 8 BCS National Championship Game in Miami, was recognized for spending his 2008 spring break as a missionary in the Philippines with his dad’s ministry. In April 2008, he organized a flag football tournament to raise awareness for orphans in Gainesville and around the world. He has spoken at a business conference in Croatia and was invited by the Southern Baptist Convention’s International Mission Board to speak to missionaries in southern Asia. He also has spoken at several prisons across the state of Florida.

Mac Brunson, pastor of First Baptist Church in Jacksonville, said he and the church are “incredibly proud” of Tim and “how much his leadership has come to the top.”

Brunson said he attributes Tebow’s “God-given gift of leadership” to his relationship with Jesus Christ, and he knows through keeping in touch with Tebow’s father Bob that the young man is staying the course.

Commenting about Tebow’s missions work, Brunson said, “I think that’s his heart … that’s his life. That’s what he grew up doing.

“I think the neater story there is the impact that he’s had on people around him,” Brunson said.