When 19-year-old NASCAR driver Adam Petty died after spinning out and hitting a wall during practice at the New Hampshire International Speedway in 2000, he died with a dream. He wanted to build a camp in his home state of North Carolina for children with chronic medical conditions or serious illnesses. 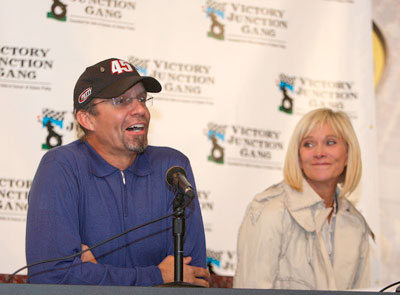 Kyle and Pattie Petty, addressing a news conference at the Kansas Speedway, are in the process of opening a second camp for children with chronic medical conditions or serious illnesses – an outreach first envisioned by their late son Adam.

He had no idea when he climbed into his car that day that his dream was closer to being realized than he could have imagined.

In honor of their son and his dream, Kyle and Pattie Petty opened the Victory Junction Gang camp in Randleman, N.C., in 2004. The NASCAR-themed camp brings in groups of children, ranging in age from 6 to 16, from 24 different disease groups at no cost – including travel to and from the camp – and provides activities specifically suited for them.

“The camp was built with these kids in mind,” said Mike Lepore, president of the new Victory Junction Gang camp scheduled to be built in Kansas City, Kan. “It was built in an inclusive way – a medically safe and sound way- so that even a child with cerebral palsy can go up a 60-foot climbing tower. We have a structure and can get the children up to the top and they can ride a zip line. They can ride a horse. They can play miniature golf. They can bowl.

“We see many children with cerebral palsy, multiple sclerosis and other physical handicaps that severely and dramatically affect their mobility. But building the camp with that in mind, we were able to build it in such a way that they can participate in everything.

“But if for any reason any of our campers cannot do a certain activity, then nobody does it that week. We have enough activities that we can schedule around it. We want them to feel special and we want them to feel nothing but joy.”

Since the initial camp opened in North Carolina, it has served just under 10,000 children from 47 states and three countries. The camp became so popular that some children had to be turned away. That didn’t sit well with the Pettys, so they expanded Adam’s dream.

In September, they announced plans to build the second camp, to be open by 2010 and fully operational by 2011. They chose Kansas City for numerous reasons – one of which was based on the fact that Adam’s dream was birthed there. Adam was sponsored by Sprint, which has its operational headquarters in Kansas City, so whenever he was in town, he visited children in local hospitals.

The Victory Junction Gang camp offers specific weeks, matching up children with the same or similar diseases. It allows the campers to see that they are not alone. The staff brings in disease-specific medical volunteers who know and understand the plight of the campers.

Lepore said parents like to congregate in the worship center at the camp – which is fitting, since Kyle and Pattie are known throughout the racing world for their faith in Christ.

The parents gather “to share fellowship, to pray and to talk with each other – to share experiences and provide support,” Lepore said. “Pattie Petty has often said, ‘Camp is a God thing.’ Losing Adam Petty was a tragedy, and they didn’t understand it, just like any parent or anyone who loses a loved one suddenly and unexpectedly doesn’t understand it.

“But now, while they have lost their dear son Adam, they feel like they have gained more than 5,000 children whose lives they have touched and provided hope for.”