Central Baptist Church pastor Tim Coker has long been fond of his perfectly manicured hair, so he became a bit worried when a bout with cancer forced him to shave his head. 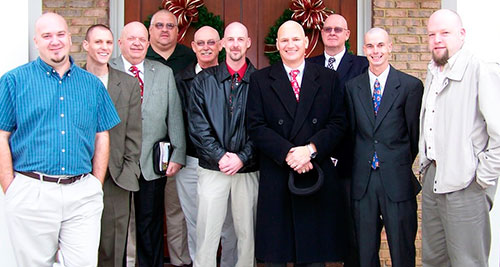 
But some members of his church felt his pain and beat him to the punch. Coker’s head was shaven on a Wednesday morning, and they had theirs shaved the night before.

“I’m not exactly sure who was behind it,” said Coker, who is being treated for non-Hodgkin’s lymphoma. “I just know I announced my diagnosis to the congregation. It sort of became kind of a running joke that I was going to eventually lose my hair.

“I’ve been pastor at Central for 13 years, and they know how vain I am and how much I love my hair. So we have kind of been laughing about it together. I heard a rumor there were guys in the church who were going to shave their heads.”

The first person Coker saw with his head shaven was Kamron Reames, Central’s minister to the students. He saw him at a restaurant on a Saturday night.

But there were more supporters when Coker stood behind the pulpit Sunday morning.

“There were several guys bald,” he said, “and I thought, ‘Oh, my goodness gracious.’ So it’s been pretty supportive and meant a lot to me. The congregation has bent over backwards to love us.”

Coker said the first Sunday he announced his diagnosis, one of the ladies came forward and said, “We’ve been leaning on you for 13 years and now it’s time for you to lean on us.”

“And they have been there if I wanted them,” he said. “They’ve been just beyond super.”

Coker said the past several months of his family’s life has in some ways been the hardest, but in others ways it has been the best of their lives.

“I’ve seen a new side of our church family, and they have been just great,” he said. “God has really worked through them. It’s never grateful to be diagnosed with cancer, but it is grateful for what God is teaching us through it.”

Ed Davis has been a member of Central for 50 years.

“Preacher Tim has cancer and likes to kid because he has a good sense of humor,” Davis said. “He said he was worried about losing his hair, but I told him not to worry, I’d shave what I have left, too.”

Brian Pickens’ wife Shannon is a hairdresser. She cut the volunteers’ locks.

“Then we we polished it off with a safety razor,” Pickens said. “I get a lot of different reactions, but when I tell people why I did it, they understand it’s for a good cause.

“Tim (has) been a part of my life for 10 years, and I would do anything in the world for him. This is just a small token of what I can do.”

Pickens said he had to sleep with a blanket on his head the first night he shaved it.

Robert Singletary shaved his head for the first time ever in 61 years.

“It makes quite a difference,” he said. “I have to wear a cap at night to sleep with the wife.”

Singletary had just gone to Shannon Pickens to have his hair cut on a Tuesday morning. He went back that night with all the others to have his head shaved.

“I paid Shannon that morning for the haircut and again that night for the trim of all trims,” Singletary said. “Now I shave my head in the shower every morning.

“We’re doing this only for Tim because we love him to death. We didn’t want him to be the only one feeling like he didn’t have any hair. We felt this was the least we could do.”

Coker is an Olanta native and a graduate of Francis Marion University and Southeastern Baptist Theological Seminary.