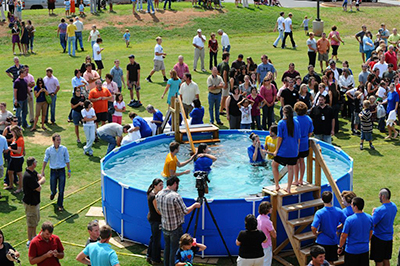 Temporary swimming pools were set up at NewSpring’s four campuses to accommodate more than 900 who were baptized Sept. 13

NewSpring Church, based in Anderson but with three satellite campuses across the state, baptized more than 900 believers Sunday, Sept. 13. 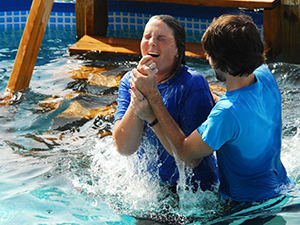 “Our services last weekend were really awesome,” Swift said. She said senior pastor Perry Noble preached a sermon called “My Faith Is a Private Issue” from a series entitled “Five Lies of the Devil.” Noble told listeners that being baptized is the first step a believer takes after salvation, then he invited people to take the step.

The church provided towels and plenty of extra clothing for all, and “we took away everyone’s excuse,” Noble wrote later that evening on his blog, PerryNoble.com.

“In the nearly 10 years of being a part of NewSpring, I’ve never seen a day like today – ever,” he continued.

Noble also told of a man who watched the service on the Internet and got into his car and drove to the church to be baptized.

“I literally can’t believe what Jesus is doing in our church right now,” he wrote, “and no one is more amazed than me.

The mass baptism service was not the first for NewSpring, which baptized 562 in a single outdoor service in September 2007.

NewSpring began as a Bible study for college students in Noble’s home in 1998. As the church grew, it began holding services at Anderson University and later at the Anderson Civic Center. NewSpring built a 2,500-seat worship center in Anderson in 2006.

The church simulcasts worship services to its satellite campuses. Each campus has a pastor and worship leader. More than 10,000 people attend NewSpring services each week. The church’s newest site, the Columbia campus, was officially launched Sept. 27.

Marshall Fagg, associate executive director of the evangelism and missions team of the South Carolina Baptist Convention, said he hopes NewSpring’s recent baptism service “is the beginning of the revival we have long prayed for in our state.”

“As heaven rejoices, I rejoice with NewSpring Church, pastor Perry Noble and over 900 new believers on their recent baptism celebration across South Carolina,” he said.