Florence Baptist Church, Pelion, which survived Sherman’s March through South Carolina in 1865 despite being burned, will celebrate its 150th anniversary Oct. 10. 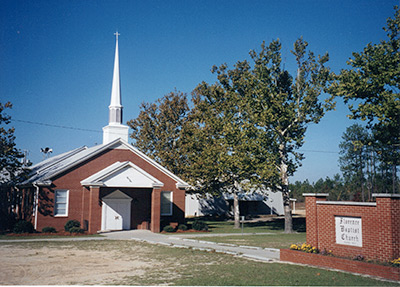 Florence Baptist Church today and, below, a painting by Nona Ginn depicting a log church building, circa 1860.

Constituted in 1860 with a membership of 23, the church was received as a member of Edisto Baptist Association at the association’s annual meeting on Oct. 5, 1860. At that time, the church had a log building located on the present site of the church.

Little exact information is known about the early beginnings of the church. In the early 1800s, believers in the area met together in a building known as Boiling Springs or Center Meeting House, which was used by all Christian denominations.

The date is not known when a group withdrew and formed a church. They met in a brush arbor at a site about one-half mile south of the present location of Florence Baptist Church. Because of the abundance of water from a spring, the congregation decided to move to the present location. The name “Florence” was chosen for the church in honor of Florence Hutto, who made a donation to a mission cause.

The Civil War had a devastating impact on families as men began to leave to go into military service. Wives and small children were left at home to try to make a living and wait, hoping the war would be over soon. On the night of Feb. 12, 1865, a rider came through the area and alerted the families that Sherman’s troops would pass the next morning. Residents tried to hide their food and valuables with little success. Many families were left destitute. As Sherman and his troops marched toward Columbia, they burned the first house of worship of the Florence Baptist Church. 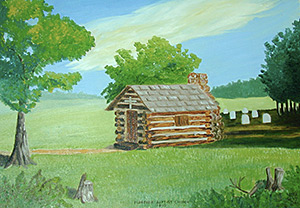 A third building was erected in 1888 and was a finished frame building. The present building of Florence Baptist Church was built in 1945. The educational building was added in 1959. The parsonage was completed in 1969. In 1992, the sanctuary was enlarged with an addition to the front of the church. In 1998, a family life center was built.

A passage in a history of the church states: “We thank God for the faithfulness, dedication and perseverance of all those earlier members. We owe a debt of gratitude to them for the church we enjoy and for the foundation of faith they have so carefully laid down for us. May we be as faithful to our Lord Jesus Christ in continuing his work until he comes.”