K.J. Choi was quick to talk about his faith after winning The Players Championship in a sudden death playoff May 15 against David Toms at TPC Sawgrass. 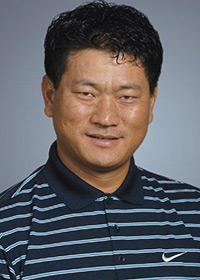 “I’m just very thankful to the Lord,” Choi said through an interpreter in a post-tournament interview. “It’s Him that allowed me to win this tournament.?- I prayed really hard all through the day, and I think that’s why God was able to give me this great gift.”

Choi, a native of South Korea, sealed the win with a par on the famed 17th hole at TPC Sawgrass after Toms missed a 3-foot par putt on the first sudden death hole. Earlier, on the 18th hole, Toms hit an 18-foot birdie putt, forcing Choi to sink his 5-foot par putt to force the playoff.

“Today I missed a lot of 5-footers, probably about three or four, and it’s because I didn’t read the lines very correctly,” Choi said. “So when I had the same 5-footer to make, I knew that there was a chance that I could miss it. But what I said to myself was let’s just get the rhythm correct, and I prayed to the Lord to help me focus and to find my rhythm.”

Choi didn’t start playing golf until he was a teenager and learned the game primarily through Jack Nicklaus’ instructional books and videos. He became a Christian when he started dating his wife.

“She told me about the Lord and the church and why it was good to have faith in God,” Choi said in a 2003 interview with the Links Letter, a publication of Christian golf ministry Links Players International. “And naturally I took her advice and after awhile, I felt it helped me and made me feel comfortable and gain patience. It also helped me concentrate more when it came to golf.

“My belief and faith in God is very strong now,” Choi continued. “Only when you have faith can there be belief in God.”

Choi has generously supported Christian and charity causes, donating $100,000 last year to Japanese flood victims and $320,000 in 2008 to the families of victims of a warehouse fire in South Korea. In 2005, after winning the Chrysler Classic in Greensboro, N.C., he gave 10 percent of his $900,000 winnings to the local Korean Presbyterian Church he attends each year when he plays in the tournament.

The Players Championship win was the first PGA Tour victory for Choi since 2008.

“I didn’t think for me to shoot under par every day on this course this week – it’s like a miracle, to be honest with you,” Choi said Sunday. “You know, to have won this tournament now, I couldn’t even think about that because my goal was to make the cut, and I just want to thank the Lord for giving me this win.” – BP