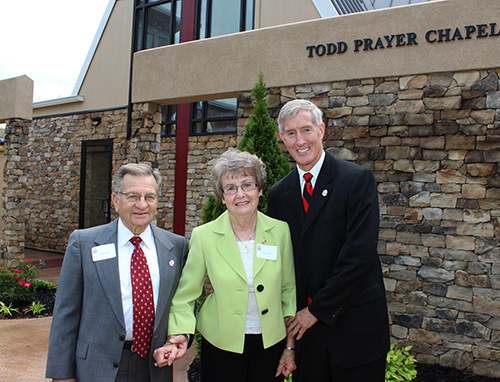 Elton and Doris Todd, along with NGU president Jimmy Epting, stand in front of the Todd Prayer Chapel.

The Craft/Hemphill Center for Evangelism, Missions and Christian Worldview, along with the Todd Prayer Chapel, were dedicated.

“Evident to us today are the beautiful landscaping, buildings, and all things we see with our eyes,” said Allen McWhite, director for global missions, “but what is most evident is God. He is the most obvious here today. No flower, building, chair can proclaim the gospel of Jesus Christ. We have been placed here to do that.”

The Craft/Hemphill Center has more than 12,000 square feet of floor space and houses the Global Missions, Christian Worldview, and Church Revitalization programs. The building is named for the late Ira Craft and his wife Betty Jo Craft, of Columbia, and Ken and Paula Hemphill, of Travelers Rest. Hemphill is NGU’s founding director of the Church Planting and Revitalization Center.

Two large stained-glass windows that Greenville-area artist Lou Ellen Beckham-Davis created have been installed in the Craft/Hemphill Center and the Todd Prayer Chapel.

The Craft/Hemphill Center for Evangelism, Missions and Christian Worldview

Kristina Hemphill Bousch, daughter of Ken and Paula Hemphill, designed the Craft-Hemphill Center’s window, which is at the center of the tall glass fa?ade. It has a total of 29 panels with a surface area of approximately 200 square feet.

The Todd Prayer Chapel was named in honor of Elton and Doris Todd, of Greer. The prayer benches, crafted by the Greenville Woodworkers Guild, were provided by Mr. and Mrs. Joe F. Hayes Sr. in honor of their son, Joe F. Hayes Jr., NGU’s executive director for development.

A Great Commission sculpture, which sits in front of the Craft/Hemphill Center, was made possible by Chip and Margaret Sloan through the estate of James Carlisle.

“We dedicate ourselves and these things for His cause to carry out the gospel to the ends of the earth,” said Tony Beam, vice president for Christian worldview. – NGU