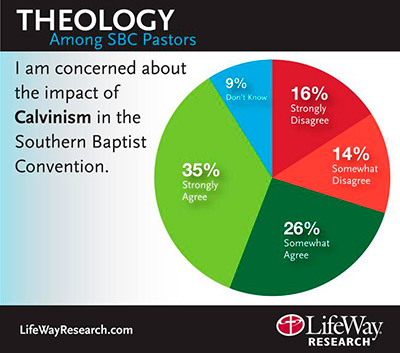 Nearly equal numbers of pastors in the Southern Baptist Convention consider their churches as Calvinist/Reformed as they do Arminian/Wesleyan, although more than 60 percent are somewhat or strongly concerned about the effect of Calvinism on the denomination, according to a new survey from LifeWay Research. 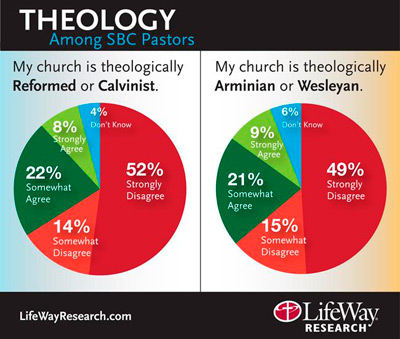 LifeWay Research presented a slate of statements about Calvinism to a randomly selected sample of senior pastors in the SBC to gauge their theological inclination and whether they are concerned about the impact of Calvinism in the convention.

Sixty-six percent of pastors surveyed do not consider their church a Reformed-theology congregation, while 30 percent agreed (somewhat or strongly) with the statement “my church is theologically Reformed or Calvinist.” Four percent did not know.

“Historically, many Baptists have considered themselves neither Calvinist nor Arminian, but holding a unique theological approach not framed well by either category,” said Ed Stetzer, president of LifeWay Research.

“Rather than ask a single question of yes or no, the new survey was intended to capture some of the complexity of the debate by covering several specific theological points and bringing clarity to how strongly pastors hold each position,” Stetzer said.

More than 90 percent strongly disagreed that “it diminishes God’s sovereignty to invite all persons to repent and believe.”

“There appears to be a lot of concern among Southern Baptist pastors on the impact of Calvinism, but the beliefs in these doctrines, at least measured by these questions, show quite a mix of beliefs,” Stetzer said.

He summarized: “Most Baptists are not Calvinists, though many are, and most Baptists are not Arminians, though many are comfortable with that distinction. However, there is a sizable minority that see themselves as Calvinist and holds to such doctrines, and a sizable majority that is concerned about their presence. That points to challenging days to come.”

The survey was conducted April 1-May 11 online and via mail from a randomly drawn list of SBC congregations. – LifeWay