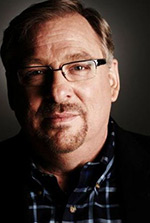 Warren, dressed in his usual casual black T-shirt and jeans, took the stage at Saddleback Church in Lake Forest, Calif. with wife, Kay Warren, and was greeted with a long standing ovation by the congregation.