Gapway Baptist Church had a Vacation Bible School with 100 enrolled that was right in line with the national attendance average, but their VBS offering this year was far from average.

The Mullins-area church contributed more than $1,000 to the Cooperative Program and an additional $400 to an outreach group doing a sports camp to reach unchurched children in their community. On top of the financial offering, the children also collected canned goods for the Marion Baptist Association’s food bank.

A healthy competition between the boys and the girls is one factor in the success of the VBS offerings, according to Katie Lewis, VBS director at Gapway. But the “biggest thing is that we have support from all of our workers, church members, and the pastor,” she said. “When we push it and get excited about it, we make it a big deal, and the kids do, too.”

Supporting missions by giving VBS offerings to the Cooperative Program is a longstanding VBS tradition in many Southern Baptist churches. In the missions rotation class, kids learn about the work of missionaries in the United States and around the globe. Their VBS leaders can tell them that the money they give helps those specific missionaries and many others to tell people about Jesus. 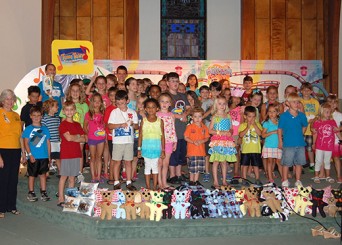 VBS offerings are also used to support a variety of other causes, both near and far. Churches often choose ministries that help children, or ones that are local, so the VBS kids can relate to the project. Gapway did both by partnering with the sports camp, as Lewis explained. “We support Victory Sports Outreach, as they are on a mission trip to our backyard, and I talk to the [VBS] kids about that and how they are witnessing to so many kids here that don’t go to a church or a VBS.”

Collecting items rather than an offering is a trend in today’s Bible schools. “I have found that the kids participate better if they bring ‘stuff’ instead of money,” said Lou Ann Jenkins, children’s minister at Cross Roads Baptist Church in Greer. This year, their VBS collected flip-flops to be taken on a mission trip to the Dominican Republic, where many children do not have shoes. “We usually set a goal and update the kids daily. They really get into it,” Jenkins added. “This year, we left the flip flops on the stage through Sunday morning so the congregation could see the pile of them. It was great fun.”

Another new twist on the offering tradition is to involve VBS participants in a more hands-on way by having them make the items that the church donates or uses in ministry. Not only did Riverland Hills Baptist Church in Irmo have VBS kids bring purchased items to be given to children in a local hospital, each participant also contributed items that they made by hand in their missions rotation classes. In crafts class at Seivern Baptist Church, Wagener, each child decorated two pillowcases — one to keep, and one to donate for children who are hospitalized.

Leaders work hard to provide unique Bible studies, themed décor and fun experiences in VBS. They also work hard to provide opportunities to give — whether it’s collecting an offering, collecting goods to donate, or making things for others. This emphasis on giving can help those who attend VBS to realize that being a Christian includes serving God by sharing his love with others — nearby, and around the world.