In the shadow of this towering urban melting pot, across the Strait of Georgia, sits the picturesque seaside town of Sidney, a year-round tourist destination known for its fishing and natural scenery.

“Most people here are enamored by the natural beauty of creation but reject the Creator. We are working hard to help people connect the Creator with His creation,” says NAMB church planter Matthew Bond.

Less than 2 percent of Vancouver Island claimed Christianity on a 2011 census, and 40 percent claimed “no religion.” 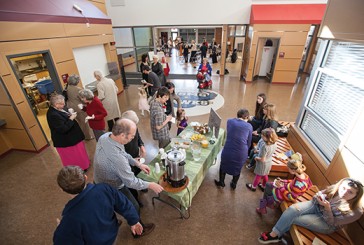 In less than a year, the Bonds established a thriving congregation and have branched out to planting additional churches across Vancouver Island, which claims a population of 770,000. (Photo by Matt Miller/SWBTS)

Bond and his wife Heather and their two teenage sons Ethan and Joseph landed in Sidney in 2012 to plant Ekklesia Church. In less than a year, they established a thriving congregation and have branched out to planting additional churches across the island, which claims a population of 770,000.

“We have wonderful conversations beginning with God,” Bond, an alumnus of Southwestern Baptist Theological Seminary in Ft. Worth, Texas, says, “but when the conversation turns to Jesus the people become defensive and turn away. We are definitely not in the Bible Belt anymore!

“Another challenge is the beauty of the island and the lifestyle of islanders. It’s hard to convince people that they need God when life seems so good.”

The Bonds’ church planting journey began in their home state of Tennessee, where Bond taught at a local junior high school as well as in a Sunday school class at their church.

“As I grew spiritually,” Bond says, “a friend challenged me to open my Christian worldview to actually include the world. This process led my wife and to sell everything and move our family to Fort Worth, Texas, to attend Southwestern.”

Soon after, a professor informed Bond of a seminary evangelism course that would take place in Vancouver, so he signed up.

“When I returned from Vancouver,” Bond recalls, “I could not stop thinking and talking about Vancouver and the trip.”

As he and Heather talked and prayed about God’s leading, they decided to take a family trip to explore the region and discuss opportunities with other church planters. 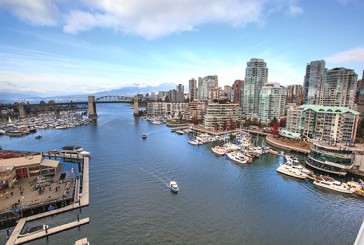 As time passed, the Bonds were convinced God was calling them to Vancouver.

“One important point about our church planting adventure is that our whole family is called to this wonderful adventure with God. This is our family mission calling, not just mine,” Bond says.

“My prayer was for God to call us as a family and for each of us to find a special place within God’s plan to serve. God affirmed this when Ethan, my 15-year-old, came home and announced he had signed me up to coach volleyball and soccer at his new school. He understands the value of building relationships through building community with others.

“Another great example is when Joseph, my 13-year-old son, shared the Gospel with a kid at school after the kid told Joseph he was going to hell. … These are the moments plus many others that God affirms our calling, and these are the stories we hold on to when we face spiritual warfare and discouragement. We are here for God’s glory and not our own.”

From the beginning, Bond says they saw God’s hand in planting Ekklesia Church.

“We planted Ekklesia in a very unique way that brought with it different rewards and challenges,” Bond says.

A group of about 40 Christians, who had been displaced from a church that closed its doors, contacted a NAMB representative for help in planting a new church. Bond accepted the challenge from NAMB and began planting Ekklesia. It was a challenge they took on “without following any of the church planting models found in the textbooks,” Bond says.

“We began meeting with this group of 40, teaching them about church planting, the vision God gave me, the Baptist Faith and Message, and our views on doctrine, evangelism, and missions,” Bond says. “We spent three and a half months meeting, teaching, worshipping and fellowshipping.

“During this time, we lost some of that original 40, and we gathered new people. In December 2012, we held a commitment service when 37 people chose to commit to being a part of Ekklesia and spreading the Gospel in Sidney.”

Since then, Ekklesia has grown to a regular attendance of 50-60 people. They added children’s Sunday school and an active youth group with about 10 teenagers. They also have six home Bible study groups.

Recently, sparks of revival and awakening have caught fire, Bond says. The congregation has seen three people place their faith in Christ along with “seeing a spiritual awakening among many senior adult Christians in the church, many that are praying aloud and sharing their faith with others for the first time.”

As part of their church planting strategy, Bond challenges church members to give themselves away, noting that they want “to send people out to plant new works where the Gospel is not being proclaimed. We are currently working diligently toward creating a strong core church in order to celebrate the sending of people to reach people with the Gospel in communities where truth is not proclaimed.”

The church has started a home discipleship group in a community 20 minutes South of Sidney, where church members who live in the area are building relationships and studying the Bible with non-Christians.

“We are praying that that God will take this group and build our first daughter church in Brentwood Bay,” Bond says, adding, “… and then keep moving down the peninsula, planting new groups in communities until we work all the way down and then all the way up the island.”

Bond points to his training at Southwestern as a “launching pad” for their ministry in Canada.

“God used the move from Tennessee to Texas as a point of separation of everything we knew in order to prepare us for a much bigger step to Vancouver Island,” Bond says.

“I consider my seminary training as an invaluable tool to my ministry of planting churches and reaching the lost with the Gospel. It provided a biblical foundation, sound doctrinal training, and crucial lessons of faith for myself and our family.”

Heather, likewise, sees the impact of their time at Southwestern. While Matthew was taking classes, Heather served in the seminary’s institutional advancement office.

“Working with, and being mentored by, women such as Mrs. Patterson, Dr. Stovall, and Karen Collett taught me the ministry of hospitality, service, and of grace,” Heather says.

As their family continues to serve in Vancouver, they remain anchored in the God who called them to this geographically beautiful but spiritually dark region.

“I love church planting because there are no safety nets to catch us,” Matthew says.

“Our dependence, faith, and trust in God has grown exponentially ….”

— Keith Collier is director of news and information for Southwestern Baptist Theological Seminary in Fort Worth, Texas.