Wesley Thompson would probably contend he’s devoted to ministry. A student at Southern Baptist Theological Seminary, he’s pursuing a degree in church ministries, with an emphasis on students and families, to improve his ability at presenting the Gospel.

Wesley Thompson also might say he is devoted to being a better educator.

A teacher at a small private school about 20 minutes from Southern’s campus in Louisville, Ky., Thompson looks forward to returning to his native Tift County and entering the classroom full-time and improving his ability at presenting the Gospel.

Neither calling is exclusive from the other, even if they did become apparent at different times, says the 23-year-old Thompson, who calls Mount Zion Baptist in the community of Chula his home church. 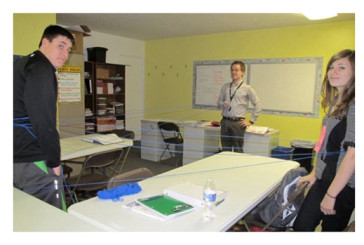 Wesley Thompson (center) uses string to illustrate how enzymes and proteins interact in an anatomy class at Cornerstone Academy of Eastside Praise in Louisville, Ky. Thompson is a student at Southern Baptist Theological Seminary and upon graduation plans to pursue bivocational student ministry while working as a teacher.

“My desire to be a teacher came first,” Thompson says. “I love school and helping young people and teaching allows me to do that on a daily basis.

“My passion and calling in life is to mentor and assist students — especially middle school and high school age.”

Although Tift County High School boasted a graduating class of approximately 500 in 2008, the year Thompson graduated, the surrounding area is typical of south Georgia and made up mostly of smaller communities.

In all likelihood, the Southern Baptist Convention is already predominately bivocational, though hard data can be difficult to find.

“Getting the exact figure is difficult, because many churches fill out their annual profile each year but fail to check the box ‘bivocational’ when they are,” Gilder says.

Gilder was a full-time pastor before becoming the Tennessee Baptist Convention’s Bivocational/Small Church specialist nearly 20 years ago. At his insistence, he has served various churches since that time in a bivocational role.

According to 2011 statistics found at the organization’s website, http://www.bivosmallchurch.net/, half of Southern Baptist churches had fewer than 50 in Sunday School. That points to at least half of SBC churches having bivocational pastors, Gilder says.

Now factor in the push for new churches. Some initial funding may help a pastor focus fully on his ministry responsibilities, but many of those financial commitments are for only a time.

All told, it means that being an effective minister in the future may require mastery of a craft that isn’t taught in seminary. Gaining credibility comes through knowing your business, inside and out, alongside your theology. And for a growing number of people, answering a call to ministry may refer to time around the water cooler with guys who have no interaction with church.

Standing on the other side from Thompson with a life’s worth of perspective in bivocational ministry is Georgia Baptist pastor Paul Reviere.

Don’t make the mistake of referring to Reviere as “part-time.” He will quickly correct that description and note that considering hours worked, there’s very little difference between full-time and bivocational ministry. Reviere should know. He’s been the pastor at Tabor Baptist Church in Tignall for 38 years.

After graduating from Georgia Southern University in 1973, Reviere moved back to his hometown of Lincolnton. He had already answered a call to serve as pastor, but a part-time salary wasn’t going to provide for himself and his wife, so he became a paraprofessional in the Lincoln County School System.

He enjoyed the work, and went back to school and earned a teaching degree. The result was a 37-year career teaching third grade at Lincoln Elementary School.

In 2010, budget cuts led to a staff position being eliminated. It so happened that the most recently-hired teacher who was about to lose her position had once been a pupil of Reviere’s.

Rather than see his former student lose her job, he retired.

Through the years Reviere has preached many times at other churches for revivals. He’s also turned down numerous opportunities to be considered for full-time positions.

“My philosophy is I don’t need to be ‘full-time,'” he says. “My calling is to supply my own needs as far as making a living is concerned so I can minister in a church where they otherwise can’t support a minister.

“Of course, there are circumstances that require a full-time minister. It’s just not me.”

Most would agree that part-time ministers work more — or at least are expected to work more — than their salaries would indicate. People in smaller congregations can occasionally grow envious of the bigger church with more resources and a full-time minister. Those expectations to attract more people end up at the pastor’s desk, even if that desk is in a spare room at his house.

As more churches move forward with bivocational positions, ministry responsibilities will fall more on the laity. That’s far from being a bad thing, Reviere says. He points to the benefits of faith being a strong part of one’s identity in the workplace.

“Being in a full-time pastorate can isolate you from the community,” he says. “When your job is part of that community, you get opportunities to support and pray for folks that aren’t as likely to come to your church.

“You’re already there with them and it becomes a simple matter of building trust. They begin to see you not as just the preacher down at the church but as a colleague.”

Matthew J. Hall, vice president for academic services at Southern Seminary says, “The guys who come to us with a desire to be bivocational usually grew up in those churches and see the need. They have a clear sense of answering that call.

“I do think there’s an upcoming renaissance of men seeking to be bivocational,” he says. “Southern Baptists can’t afford to forget about those churches.”

Kenneth Cloud, director for Bowen Baptist Association in southwest Georgia, says, “About 65 percent of my churches are bivocational.”

“It’s becoming very difficult to find men who want to serve in them,” he says. “Search committees can’t fund full-time positions . They think it’s like they’re backing up by going with a bivocational pastor, but I tell them to not think of it that way. It’s regrouping.

“Our Baptist colleges need to have an emphasis on the platform of intentionally being bivocational,” Cloud says. For the record, degrees in business, nursing, criminal justice and education are among those offered at Brewton-Parker College, Shorter University, and Truett-McConnell University alongside studies such as world missions, Christian studies, and religion and philosophy.

“It’s a different calling,” Cloud says. “I believe God has called people to serve these smaller areas, but they’re not answering the call. Who will go?”

Thompson had teachers and ministers who inspired him to pursue his calling. After high school he attended Abraham Baldwin Agricultural College in Tifton to earn his associate’s degree in education. He would go on to attain his bachelor’s degree in that field through the University of Georgia.

“During my undergrad years at our campus BCM I met a guy who was a youth pastor at a church who became a great friend of mine as well as mentor to me,” Thompson says. “For a while I felt I would be doing God a disservice if I was not strictly doing ‘church-ministry’ 100 percent of the time. He was able to help me better sense my calling and understand it was OK to desire to be a bivocational pastor.”

For the past four summers Thompson has worked with LifeWay Centrifuge camps. The experiences, particularly pointed questions about theology from students, convinced him of the need for theological education. In 2012 he worked as a youth leader alongside a bivocational pastor at “a small country church.” That pastor also helped influence Thompson’s decision to pursue bivocational ministry.

“In this guy I could see his heart for his congregation as well as his heart for the people that he worked with outside the church. It confirmed my desire to work with students in a church setting as well as in a real world environment such as a school classroom.”

What Thompson remembers about his own teachers that inspired him could serve as a ministry statement of his own.

“These individuals knew how to help students in all aspects of life.”

— Scott Barkley is production manager for The Christian Index (www.christianindex.org), newsjournal of the Georgia Baptist Convention, where this article first appeared.