A gathering of Southern Baptist missionaries grappling with what’s working in missions — and what isn’t — welcomed a new colleague to the strategic discussion: IMB president David Platt.

The long-planned conference, held earlier this fall in Asia, came at an ideal time for Platt, 36. The influential pastor, mission mobilizer and “Radical” author was elected a few weeks earlier by IMB trustees to lead Southern Baptists’ international mission enterprise. Now he’s focused on absorbing the huge amount of knowledge required for his new job. The five-day gathering enabled him to meet face to face with missionaries working in Asia, Africa, Latin America and Europe — something that might have taken him months or years to do otherwise.

“I was encouraged that the Lord orchestrated all of this, that He [brought] all these leaders together at this time of transition to be on the same page together, to study the Word together, to pray together, to worship together, to plan and work together,” Platt said. “I walked away totally energized that God’s doing something unique here — and just overwhelmed that I get to be a part of it.” 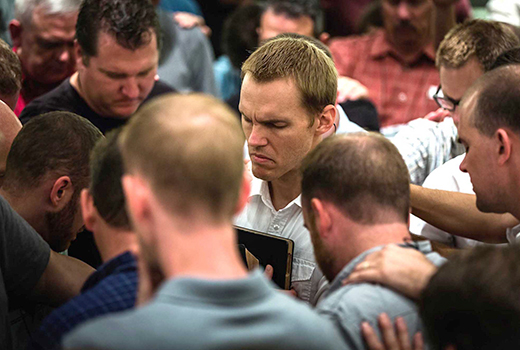 Missionaries surround new IMB president David Platt to pray for him as he seeks to mobilize churches. The prayer time came during a meeting in Asia that brought together missionaries to discuss breakthroughs and barriers. (Photo by Hugh Johnson/IMB)

Platt went to the five-day conference primarily to “listen” and “learn,” he said. He took full advantage of the opportunity, meeting from dawn until after midnight each day with a wide variety of missionaries, from region-wide strategy leaders to front-line workers. He also spoke to the full gathering several times, laying out his initial priorities as IMB leader. His messages received a warm response from missionaries.

“We’ve got great days ahead of us,” one missionary predicted of Platt’s leadership. “David has a passion for the lost that is contagious. It will spread out to other pastors, to churches, to missionaries. Our job is to lead, to mobilize and get out of the way. Let the church do what it was created to do: make disciples among all nations.”

During TED-type “up talks,” breakout sessions and small-group circles analyzing specific case studies, Platt joined other conference participants learning about mission breakthroughs that can be applied worldwide — and persistent barriers, or “stuckages,” preventing the advance of the Gospel. The goal: to share effective approaches and spread fruitful practices as widely as possible.

“As I had this time with brothers and sisters who are serving on the front lines of unreached peoples, it was so encouraging to hear different stories — whether it was training church leaders in East Asia and seeing the Gospel spreading through a burgeoning movement of churches there, or hearing from brothers and sisters in South Asia who are seeing a mighty move of God in one of the spiritually darkest places on the planet, or moving down to South America and hearing about what God’s doing in the middle of the Amazon,” Platt said.

“Not every place in the world is seeing this mighty move,” he added. “There are other brothers and sisters who are sharing in different places of struggles and hardship. They’re facing walls and barriers. But the Gospel is spreading through them and it’s pressing through barriers as we persevere in our praying for them and going alongside them. That was the whole theme of the conference: The Gospel is the power of God for the salvation of those who believe. Romans 1:16 is being proved over and over again in all kinds of different places in the world.”

An urgency to unleash local churches in missions permeated Platt’s messages during the conference. He outlined the “five desires” he has for mission strategy, a list he also is sharing with International Mission Board staff, Southern Baptists and the wider evangelical Christian community: to exalt Christ globally, the supreme purpose of missions; to mobilize Christians for God’s mission; to serve and equip churches for their biblical purpose of making disciples among all nations; to enable churches to reach every unreached people with the Gospel and plant churches among them; and, ultimately, to complete God’s commission to the church.

“[I was] thankful for the time that I had to listen, to learn and hopefully to speak and to encourage as well,” Platt said after the conference. “My prayer in the days to come for our IMB family and the churches we are mobilizing is that the Lord would conform us all more and more to His heart, to His Word and His truth … in seeing His mission accomplished.”