Danny Burnley, pastor of Laurel Baptist Church in Greenville, has never come across anyone like 88-year-old John Aspray.

In 2012, Aspray and his wife, Gayle, joined Laurel Church. He received a ministry booklet, as all new members do, and signed up for building and grounds. He approached Burnley and asked if he might paint all the iron railings around the church facilities.

“He began painting, and he hasn’t stopped since,” said Burnley. 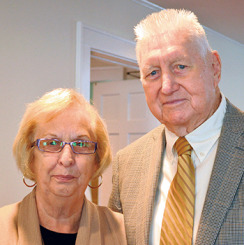 After painting the railings, Aspray painted all the exterior windows in the basement area and the concrete walls along the exterior of the building. He painted the entire library, as well as all the doors and trim through the church facility, and he repaired and painted a number of restroom facilities. Later, he moved on to the church’s third floor, the children’s area and the baptistery dressing rooms, where he painted and laid new floor tile. Then he remodeled and painted the church’s prayer room.

A few weeks ago, Burnley drove into the parking lot and found Aspray on the third-floor fire escape with a gallon of paint in one hand and a paint brush in the other. He painted the entire three-story fire escape.

He then turned his attention to the exterior of the children’s wing — where he recently completed painting the awnings, doors and trim — and finished some heavy landscaping work.

“This is his love, desire and gift to the church,” said Burnley.

Recently, Aspray told Burnley he dreamed he was 100 years old and was painting the third-floor fire escape. “He said it was a wonderful and exciting dream,” said Burnley. “Then he said, ‘Wouldn’t that be wonderful? I think I am going to make that a goal — to be 100 and still painting for my Lord.’ ”