Jamie Ballentine is in the “mascot ministry.” What does that mean? He says, “My talent is performing as a stuffed animal.”

He was “Cocky,” the mascot for the South Carolina Gamecocks, from 2002 to 2006 and planned a career as a professional mascot. Working in different places, he eventually landed in Charleston and was the mascot for the RiverDogs minor-league baseball team. Ballentine said, “[Actor] Bill Murray owns the team, and he often came around. He would even call me by name. That was kind of neat.”

Ballentine came home to visit his parents in Blythewood one weekend. “I heard a voice in my head telling me I would be a leader here but [to] focus on the youth now,” he said.

Sensing God was calling him into vocational ministry, he began working with the youth at Harbor Light Baptist Church on James Island and started course work toward his master of divinity degree from Southeastern Baptist Theological Seminary. He is currently serving as interim pastor for Pine View Baptist Church in Blythewood while continuing a unique mascot ministry beyond the church. He plans to finish his degree with Southeastern online. 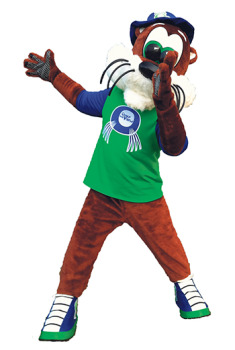 His ministry is called “Otter This World” and features a character called Olly, the otter, played by Jamie. He and his wife, Brittany, who is also experienced in mascot performance, make up the team at present, but they plan on adding another character, additional staff and a video component, and they plan to produce children’s books in the future.

“I do a show for about 15 to 20 minutes, take a break and change out of the otter costume and finish with a message,” said Ballentine. The message is the core of his budding ministry, “Family Meals,” in which he emphasizes five keys for families: leaving a family legacy, building a family using the right ingredients, assessing how sin has damaged relationships, emphasizing Jesus as the only one who satisfies our spiritual hunger, and challenging people to follow a rhythm for living (as found in Deuteronomy 6:7).

The Ballentines come to churches on a love-offering basis and desire to “help churches in their outreach.” He added, “The mascot breaks downs barriers, and we can use this to come alongside churches and help them with outreach and special events. Smaller churches are really drawn to it. Our goal is to point people to Jesus and share the gospel.”

The couple can be contacted by phone at 803-609-3400, online at www.ollytheotter.com or on Facebook at “Olly the Otter” or “Otter This World.”