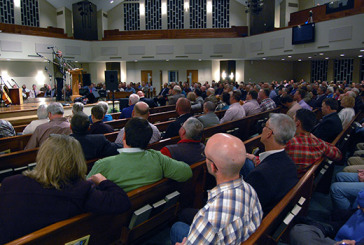 Pastors’ Conference attendees listen as Travis Agnew preaches on the critical importance of parents sharing the gospel with their children.

Houston, who has served at Blue Ridge View Church for almost 16 years, was elected during the annual Pastors’ Conference meeting Nov. 10 at North Trenholm Baptist Church in Columbia. He succeeds Gary Rogers, pastor of Pelham First Baptist Church near Greenville, who presided over the Nov. 10 meeting.

Houston most recently served as vice president of the Pastors’ Conference. He is married to the former Stacey Gallamore of Easley, and they have two children: Harrison, 18, and Sadie Grace, 13.

Speakers at the 2014 Pastors’ Conference, which met under the banner of “This Hope” and featured sessions on “Hope for His Servant,” “Hope for His Church,” and “Hope for His World,” included Mike Runion, Richard Harris, David Mills, Keith Kelly, Ken Hemphill, Travis Agnew and Greg Mathis. 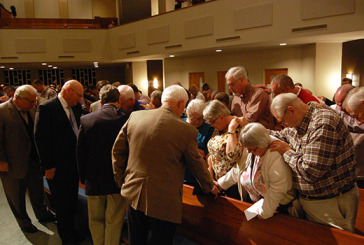