Ethnic diversity is part of God’s purpose for humanity and the reflection of the fullness of his gospel plan, said R. Albert Mohler Jr., president of Southern Baptist Theological Seminary, during his Feb. 3 convocation address.

“Diversity isn’t an accident and isn’t a problem, but instead is a sign of God’s providence and God’s promise,” Mohler said in his address, “The Table of the Nations, The Tower of Babel, and the Marriage Supper of the Lamb: Ethnic Diversity and the Radical Vision of the Gospel of Jesus Christ.”

“If the church gets this wrong, we are not getting race and ethnic difference wrong — we are getting the gospel wrong,” he said. “We cannot obey the Great Commission without celebrating the glory of the new humanity that only Christ can create.”

“For Christians,” Mohler said, “the question comes back to the one asked of Jesus by a lawyer: ‘Who is my neighbor?’”

Only the message of real hope, rooted in a Christological interpretation of the whole Bible, can overturn the false stories that harm our world, Mohler said. This gospel “counter story” offers a lens through which Christians can make sense of tragedies like those in recent months in Ferguson, Missouri, and Paris, he said.

Employing a biblical-theological reading of the Table of the Nations text paired with the story of the Tower of Babel in Genesis 10-11, Mohler observed that the Bible emphasizes the common descent of all humanity from an historical Adam and an historical Noah. After the Flood, three lines from the three sons of Noah compose the whole of humanity into 70 nations.

At the Tower of Babel, these descendants are dispersed throughout the earth because of their disobedience, though Mohler carefully noted the precise nature of their sin. While God had ordered Adam to “fill the earth and subdue it” in Genesis 1:28, in Genesis 11 Adam’s descendants built a tower in defiance of God’s command.

By creating language barrier at Babel, God was condemning their sin and restricting their communion. The divine judgement, Mohler said, was no difference or dispersion, but confusion.

Far from countering God’s intended purpose for humanity, Mohler said, the dispersion was actually in fulfillment of his plan from the beginning. In the Abrahamic Covenant, God’s purpose in blessing “all the nations of the earth” (Gen 12:3) is introduced, and the international program of God is fulfilled in the life of Jesus, the apostolic founding of the church, and the final victory of God at the marriage supper of the Lamb.

Pernicious misinterpretations of the biblical story perpetuate racism, Mohler said, as there is nothing mentioned in the Table of Nations or the Tower of Babel about skin color or physical difference between people. The differences between cultures and people groups are to be celebrated and enhanced by the biblical story. It is only sin that sprouts racism and ethnocentricity, he said.

“To be human is to be ethnic,” Mohler said. “[Diversity] is not overcome by the gospel but glorified by the gospel.” 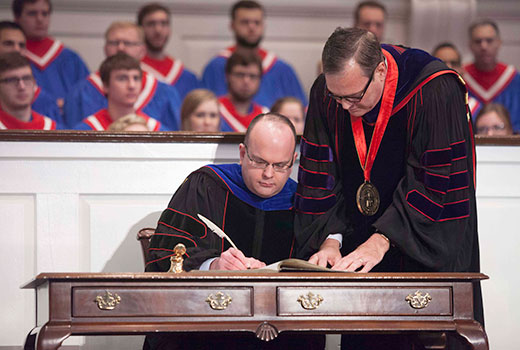 Before Mohler’s address, three professors elected to the faculty during the fall trustee meeting signed the Abstract of Principles during convocation. The Abstract is the doctrinal statement of Southern Seminary. The professors signed the original document drafted and signed by founding faculty, including James Petigru Boyce, John A. Broadus, Basil Manly Jr., along with every subsequent faculty member of the school.

Audio and video of convocation can be found at sbts.edu/resources.