As the world watched the escalating devastation in Nepal, more than 40 International Mission Board workers from South Asia gathered April 26-28 at Prestonwood Baptist Church in Plano, Texas, for a conference encouraging 140 churches to make commitments to reach the nations.

Conference attendees prayed for those impacted by the 7.8-magnitude earthquake that struck Nepal April 25. More than 4,000 deaths have been reported and the quake was felt in Nepal, India, Bangladesh and the Chinese region of Tibet.

A strategy leader, whose work includes Nepal, shared his mixed emotions about being in Texas instead of working beside his friends in the devastated country.

“I don’t know about the Lord’s timing. I’d rather be there today,” he said.

But he acknowledged the opportunity to advocate for the people he loves and asked U.S. churches to enter significant partnerships on behalf of South Asians.

“It’s no coincidence that a number of us are gathered here in one place,” he said. “In a way, it’s almost like God is clashing the cymbals and banging the gongs to say, ‘This is it.’ As we consider the ends of the earth, it is a strategic moment in Nepal. 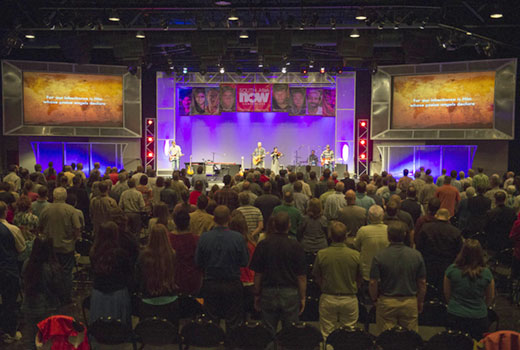 Participants gather this week in praise and worship at the South Asia NOW conference at Prestonwood Baptist Church in Plano, Texas. (Photo by Paul W. Lee/IMB)

“It’s hard not to focus on the loss of life in Nepal, but the potential of what comes next is really exciting,” he said. “Southern Baptists have been praying for generations to reach the lost. They’ve prayed, ‘Lord, shake the nations, Lord, do something that causes and breaks hearts open to look to you.’ Now is the time.”

During a time of prayer for Nepal at the opening session of the conference, the worker reminded the crowd of nearly 400 participants that Hindu temples and man-made buildings crumbled, “But we worship a God whose throne was not shaken.”

He asked believers in the U.S. to pray the Nepali church will “find its voice” and set themselves apart as people who meet the needs caused by the devastating earthquake in a way that will make history.

“And they will, it’s almost inevitable, because we know the Word and the Holy Spirit have been invested,” he said, referring to Southern Baptists’ work in Nepal for decades.

“Pray for boldness,” he said. “Pray for clear presentation of motives that as the Nepali church responds, that everyone would know it’s because something’s different about these people. It’s not just the cultural hospitality. This is some other motive of love … that’s compelling the Nepali Christian church to respond.”

In Plano, churches and missions organizations from 23 states gathered for the three-day event to join together in reaching South Asia, an area that includes India, Nepal, Pakistan, Sri Lanka, Bhutan, Bangladesh and the Maldives, with the Gospel. Workers estimate 1.6 billion people live in this part of the world, and most have never heard the name of Jesus.

–Pray Christians and churches will be the salt that seasons and the light that pierces the darkness around them in this time of crisis.

— Pray God will open unprecedented doors for the Gospel in these coming days, as personnel and teams have opportunities to demonstrate the love of Jesus Christ through acts of compassion and mercy.

— Pray for a great spiritual harvest.