Robed in caps and gowns over their white prison uniforms, 33 inmates in Texas’ maximum security Darrington Prison Unit made history May 9 as they received bachelor’s degrees from Southwestern Baptist Theological Seminary, becoming the inaugural graduating class of the state’s first seminary prison program.

“I’m overwhelmed at what God has done,” Patrick said during the ceremony inside the prison chapel. “Only God could do this.”

Patrick and Sen. John Whitmire, current committee chair, were the legislative heads behind the creation of the program, which began in fall 2011. Each year since, a new class of 40 students has been added to the program with 114 currently enrolled.

Looking at the graduates, most of whom will be deployed in groups of four or five to assist chaplains and minister in six other state prison units, Patrick called them “prison apostles.” He charged them to “be models and examples of what Christ can do in [people’s lives] if they will give their [lives] to him.”

This summer, approximately two-thirds of the graduates will be transferred to six maximum security facilities in Huntsville and Tennessee Colony, Texas to reproduce the ministries — and the radical changes — that have been witnessed in Darrington. The rest will remain at Darrington to mentor underclassmen in the program. 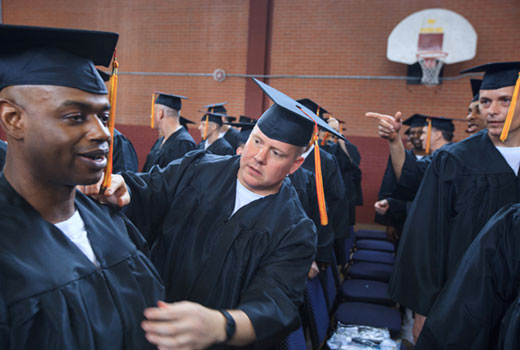 In a May 7 press conference, Whitmire described the remarkable change in culture at the Darrington Unit over the past four years as a result of the program. “When we started this, (Darrington) was one of our toughest, problematic units, and I’m here today to announce that it’s now one of our best.”

Whitmire, who has served in the Texas Senate for 30 years, recounted the history of the program during the graduation.

“I have scores of programs that I’ve worked in,” he said, citing drug and alcohol programs, procedures for pregnant female inmates and other major initiatives to clean up the prison system and rehabilitate inmates. “But … nothing is more impressive and moving than to be a part of this program. … I’m a better man, a better senator, and a better Christian because I’m here participating in this program.”

Whitmire said the seminary program demonstrates that Texas is “tough on crime” but also “smart on crime.” He told graduates that he plans to use their success in changing prison culture to argue for changes in the state’s guidelines regarding consideration of parole, which is largely based on the nature of the crime committed.

“I know up to this point that you are demonstrating that you are a good risk for society,” Whitmire told graduates. “You’re going to leave here and minister at the other units and turn lives around and save lives from crimes. I’m going to make your case that in a few years, if you continue to turn people around and behave like I know you will, work with the wardens where you are sent, and are responsible for your families, I’m going to continue to work in Austin and say, ‘Okay, the nature of the crime is important, but there are other factors. You’ve got to give my ministers the chance after they’ve saved souls in other prisons to save souls on the streets of Houston.'”

Texas Department of Criminal Justice (TDJC) executive director Brad Livingston challenged graduates to take what they have learned and apply it to the ministries they will have in prison.

“What you’ve accomplished is extraordinary, but it’s just the beginning. As you go out into these units, rely on each other, support each other, but rely ultimately on God. You will be an inspiration to others. You will allow God to work through you to reach hundreds and thousands of others,” Livingston said. “Before you know it, you will have peers in every one of our units across the state. Imagine the profound impact that God will have through you and others that follow you. I couldn’t be more proud of you.” 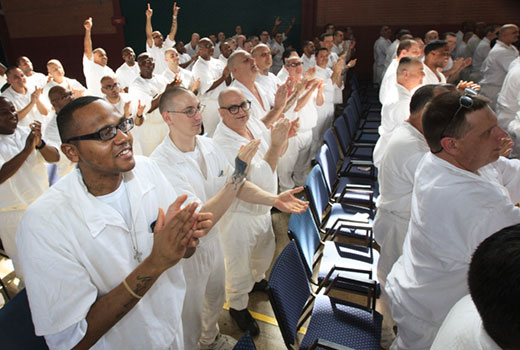 Just before graduates walked across the stage to receive their diplomas, Southwestern Seminary president Paige Patterson gave a final charge to “his children” from Micah 6:8. Patterson pointed to the graduates’ academic achievements in the strenuous, 125-hour degree program and said their education could be a “stepping stone to greatness,” but it would only be so if they were “agents of mercy … (who) walk humbly with God.”

“You have done a great deal to educate the mind,” Patterson said, “but this program is a little different, isn’t it? Because the program has not just been about the mind; it’s been about the heart. And, oh, how you’ve done so unbelievably [well]. I thank God for every one of you today.”

Brandon Warren, who has served as the program’s administrative assistant from its beginning in 2011, is also a Master of Divinity student at Southwestern’s Houston campus. Warren is not unfamiliar with prison, having served eight years at a different facility before his release years ago. Like many of the men in the Darrington program, he found faith in Christ while in prison. Before serving at the Darrington program, he wrote theologically rich correspondence courses on basic Christian doctrines for use in prisons across the state. At Darrington, Warren oversees students’ coursework, grades papers, assists professors and serves as a liaison between the school and the prison.

As a way to honor the men in the Darrington program, with whom he has built strong friendships, Warren delayed his graduation from Southwestern and received permission to receive his master’s degree at the prison graduation ceremony. As he walked across the stage, the chapel erupted in applause. 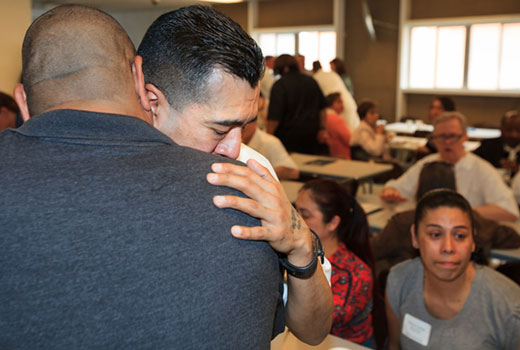 Attended by state dignitaries, friends and family of the graduates, seminary faculty, and friends of the Heart of Texas Foundation, the graduation was a celebration of what many described as a miracle. The vision for such a program came from Grove Norwood, Heart of Texas Foundation executive director, after he experienced a similar program by New Orleans Baptist Theological Seminary at Louisiana’s Angola Prison. He gained the support of Senators Patrick and Whitmire, who visited Angola to see if it could be reproduced in Texas.

Norwood and the Heart of Texas Foundation have been the primary fundraisers of the privately funded program, which uses no tax payer dollars. The funds raised have gone to support educational materials, computers, books for the prison’s seminary library and other program needs. Other major contributors to the budget have been Southwestern Seminary and the Southern Baptists of Texas Convention, which initially gave a $116,200 grant in 2011 to provide library books, classroom furniture, technology, half of the ongoing costs for professors’ salaries and travel expenses for the first two years.

For more information on the Darrington seminary program, visit www.swbts.edu/darrington.

Having lost everything, inmate finds hope, ministry in the gospel

This is how Roland Guerra, an inmate at the maximum security Darrington Prison Unit, describes his life before Christ. After making a series of poor, and criminal, decisions, he says he entered prison in a “really bad place.”

Although he had heard about God’s goodness, Guerra felt his life experiences were telling a different story. He joined a Christian Bible study in prison in search for answers to his questions.

“When I lost everything that was important to me, I became desperate … and had nowhere to turn,” Guerra recalls. One day, he opened his Bible up and randomly selected the book of Job, which tells the story of a man who lost everything.

“I was so intrigued by his story, how Job lost everything, and how the Lord rewarded his faithfulness,” Guerra says. He was so drawn in by the book that he kept reading the Bible all the way through the book of Revelation and then started at the beginning in Genesis and read the rest of the Bible over the course of three months.

While reading through the Gospel of Matthew one night, he got down on his knees in his cell and cried out to God to save him. His life was changed immediately, and he began witnessing and teaching the Bible to other inmates.

Sometime later, Guerra was recommended by the prison chaplain to join the inaugural class of Southwestern Baptist Theological Seminary’s undergraduate program in biblical studies and was subsequently transferred to Darrington just before classes began.

When Guerra entered the program, he committed himself to reading every word of his assignments. He has kept that commitment, excelling in his classes and holding one of the highest GPAs among the graduates. Recognizing an educated man is a tool for the Lord to use, he applies his schoolwork to the Bible studies he teaches and his counseling and mentoring of other inmates.

Guerra has earned a reputation as a mediator and pastor in the prison, which opened the door for him to be one of a few students who is allowed to “tier walk.” Essentially, the warden has given them permission to go into parts of the prison such as solitary confinement, where they would otherwise be forbidden, to pray and read the Bible with some of the most troubled prisoners.

“I feel like I’m a dispenser of hope,” Guerra says. “God is using me to bring hope to these men who are locked up and isolated from the rest of [us].”

As a result of the seminary program, Guerra says the atmosphere in the prison has changed.

“It’s not the same as when we first got here,” he says.

Guerra, who is serving a 30-year sentence, says he’s seen a reduction in violence and stronger character development within the general population. Even better, he says, more inmates are talking about Jesus.

Shortly after the seminary program started, one of the students started a ministry called Makarios, which comes from the Greek word meaning “blessed.” Makarios groups gather throughout the unit each week for discipleship and evangelism.

Guerra and other students hope to take this ministry model with them in the coming months as they’re transferred to other maximum security prisons in Texas in groups of four to five to assist chaplains, minister and counsel in those units.

“In prison, there are a multitude of theologies,” Guerra says, noting that inmates often have pieced together their own belief system from a “hodgepodge” of religions.

“That’s why we want to preach the Gospel. We believe the Gospel is the answer to all of life’s problems.”

Watch a video interview with Guerra at https://youtu.be/9_kiG3GJFVw.

Get Baptist Press headlines and breaking news on Twitter (@BaptistPress), Facebook (Facebook.com/BaptistPress) and in your email (baptistpress.com/SubscribeBP).

— Keith Collier is managing editor of the Southern Baptist TEXAN.
Logging In...