The premise behind the Journey of Hope Ministry Center is simple.

“There are as many hungry people in rural America as there are in urban America,” said Doug Mitchell, pastor of Midland Baptist Church in Bell Buckle, Tenn., which operates the center.

And, he said, people need to hear about Jesus.

The ministry center actually began with the late Dean Cantrell, a deacon who would pick up bread from local outlets and deliver it to needy families. Cantrell’s health worsened in 2009 and, before his death, he asked the church to take over the bread ministry.

“We didn’t know what to do with it,” Mitchell admitted. Word spread that bread was available and, before long, the pastor had to find more bread because Journey of Hope continued to run out.

The ministry has since grown “leaps and bounds,” Mitchell said. It outgrew the church but God opened doors for a move across the street into the old Midland School building.

The majority of the food now is donated by Second Harvest Food Bank and a nearby Walmart distribution center. The church pays for the transportation cost only for the Second Harvest food, with God providing the needed funds. “We have waited on God,” Mitchell said, “and the money always shows up.”

Mitchell estimated that Journey of Hope Ministry distributed more than 3.5 million pounds of food last year from Second Harvest, Walmart and other sources, including meat and fresh fruits and vegetables. 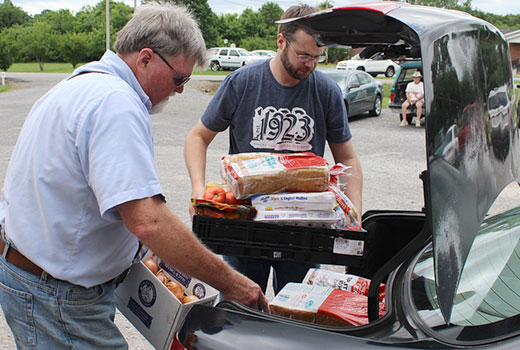 Food is distributed twice each week in four-hour blocks on Fridays and Saturdays at the center, during which families also can select clothing and household items.

Approximately 600 families encompassing about 2,000 people receive food during the two days. And it’s not the same families, Mitchell said. The center has a software program that tracks who receives food and how often. About 60 new families are reached each week, the pastor said.

Reflecting on the ministry, Mitchell said if God had “thrown this all on us at once, we would have run from it.”

Instead, the ministry grew steadily and God always provided what the church needed at the right time to meet the needs of people in rural Rutherford and Bedford counties.

Besides the food, God has provided a stable of loyal volunteers. When Midland assumed the ministry in 2009, about 60 people were attending the church’s Sunday morning services. The number has nearly doubled since, yet the Journey of Hope outreach is still more than Midland can do by itself, Mitchell said, noting that the center now has volunteers from local churches of all denominations.

That was never more evident than just recently.

On Palm Sunday in March, vandals broke into the center, causing an estimated $30,000 in damages, including some refrigeration equipment. The center did not have insurance on the contents.

Local media picked up the story and shared it throughout Middle Tennessee.

Randy C. Davis, executive director of the Tennessee Baptist Convention, learned of the need, and the TBC provided a gift from the Golden Offering for Tennessee Missions to assist with some of Journey of Hope’s losses.

Without even being called, about 60 volunteers showed up the following day to clean up the center and prepare for the next week’s food distribution.

“We did not miss a week,” Mitchell said, especially in regard to the center’s primary reason for being: Amid each food distribution, Mitchell presents a short message and prays with the people.

“There are a lot of people who have accepted Christ as Savior as a result of this ministry,” Mitchell said. “I can’t remember a time when at least one person didn’t accept Christ. That’s why the ministry is here — to spread the Gospel.

“When a mom is worried about her babies eating, she can’t concentrate on anything else,” Mitchell said. In feeding the children, he said, parents are more open to hearing the Gospel.

Mitchell also has seen people who were raised in the faith “but were later hurt by a church” who have returned to the fold after receiving help from the center.

“This ministry is a good way to see the love of Christ,” the pastor said.

Roger Brown, pastor of Cedar Grove United Methodist Church in Murfreesboro who volunteers at the center, described Journey of Hope as “an opportunity to partner in the body of Christ to spread the Gospel through sharing God’s love and feeding the hungry.”

Midland member Diane Douthit, one of the ministry’s co-directors, said she and her husband David spend numerous hours at the center “to show God’s love” by preparing for the distribution as well as helping when the center is open. “It’s definitely a labor of love for us,” she said.

Sorah cited several lessons to be learned from his visits to Midland Baptist in the rural Concord Baptist Association:

1) One man’s vision can change a whole church and community. “This ministry began with the one man answering the call of God,” Sorah said, “and now there will be people in heaven because of his obedience.”

2) Small churches can do great works for the Kingdom of God. “We’ve got to stop making excuses why we aren’t reaching more people with the Gospel,” Sorah said. “We must do what God calls us to do and stop thinking about what we can’t do.”

3) See the harvest field. “Pastor Doug had to see his harvest field white unto harvest. When he did, he obediently presented the Gospel. The results speak for themselves,” Sorah said.

“What if he had never gotten his Bible out that first day and preached? Look at all that might have remained lost. We’ve got to take advantage of our opportunities.”

Midland and their pastor are “faithfully fulfilling their calling,” Sorah said. “What an example they are for other churches to follow.”

Mitchell said he has been blessed immeasurably through Journey of Hope. He has seen single moms who were helped through the ministry return when “they were on their feet” and donate baby clothes and items to the center “because they want to give back.” Others have become volunteers at the center.

“I see God’s hand in all that we do,” Mitchell said. “Not a day goes by that I don’t thank Him for letting me be a part of what He is doing here.”

For more information about the Journey of Hope Ministry Center, call Mitchell at 615-713-0572.

— Lonnie Wilkey is editor of the Baptist and Reflector (www.tnbaptist.org/BRNews.asp), newsjournal of the Tennessee Baptist Convention.