Messengers to the 2017 Southern Baptist Convention annual meeting denounced “alt-right white supremacy” in a nearly unanimous vote Wednesday (June 14) after a tumultuous day of refusing to address the issue.

It appeared maybe fewer than 10 messengers in the Phoenix Convention Center hall voted in the afternoon session against a resolution on “the anti-gospel of alt-right white supremacy.” The “alt-right,” a movement that advocates white nationalism, has gained increasing attention in the last 18 months.

The action came after a wave of protests on social media from black and white Southern Baptists and other evangelical Christians greeted the failure Tuesday of the Resolutions Committee and messengers to bring an “alt-right” resolution to the floor. 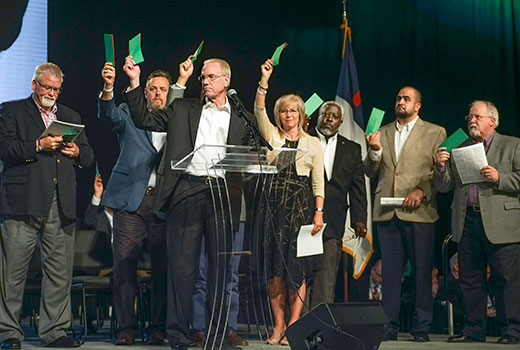 Southern Baptists overwhelmingly pass a resolution June 14 condemning the racism of the alt-right movement. Members of the Resolutions Committee that crafted the resolution, led by Barrett Duke (center), chairman, and executive director of the Montana Southern Baptist Convention, vote for its passage. (Photo by Bill Bangham)

The Resolutions Committee asked Tuesday evening for an opportunity to bring such a resolution to the convention Wednesday, and the Committee on Order of Business and messengers approved its request.

In the resolution they approved Wednesday, messengers said they:

— “[D]ecry every form of racism, including alt-right white supremacy, as antithetical to the Gospel of Jesus Christ;

— “[D]enounce and repudiate white supremacy and every form of racial and ethnic hatred as a scheme of the devil intended to bring suffering and division to our society;

— “[A]cknowledge that we still must make progress in rooting out any remaining forms of intentional or unintentional racism in our midst;

— “[E]arnestly pray, both for those who advocate racist ideologies and those who are thereby deceived, that they may see their error through the light of the Gospel, repent of these hatreds, and come to know the peace and love of Christ through redeemed fellowship in the Kingdom of God, which is established from every nation, tribe, people, and language.”

After the vote, most messengers stood to applaud the result. 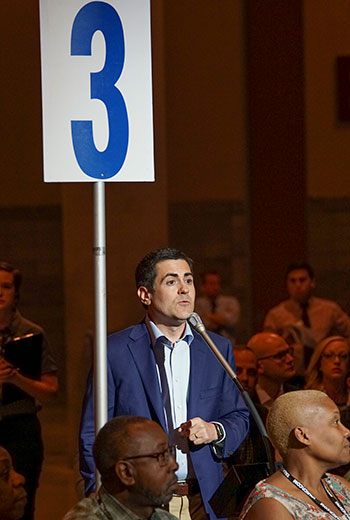 Ethics & Religious Liberty Commission president Russell Moore speaks from the floor before messengers overwhelmingly passed a new resolution condemning the racism of the alt-right movement June 14. Moore said “white supremacy and racist ideologies are dangerous because they oppress our brothers and sisters in Christ. Unrepentant racism sends unrepentant racists to hell,” Moore said. Let’s stand “for justice and mercy in the cross of Jesus Christ.” (Photo by Adam Covington)

Dwight McKissic, the African-American pastor who submitted the original resolution on the “alt-right,” expressed gratitude for approval of the final version after the Resolutions Committee and messengers failed to bring his proposal to the floor Tuesday.

“I’m grateful that things have ended up like they have, I think, for the kingdom of God’s sake,” McKissic told reporters after the vote. “I think we’re back to a good place after a 24-hour roller coaster ride.”

The pastor of Cornerstone Baptist Church in Arlington, Texas, said he was “very pleased” that the final resolution — which was markedly different from his version — addressed the “alt-right” and white supremacy. “I think we’re unified around that,” he said.

The fact it took nearly 24 hours to pass such a resolution clearly disturbed McKissic, however. “I think that today’s vote will help to mitigate some of the hurt and some of the pain,” he said, “because it’s painful to watch people who tout biblical inerrancy and who tout the centrality of the gospel have to deliberate over denouncing white supremacy.”

He was encouraged “to see so many Southern Baptists take a courageous stand” and for a generation of them to say, “We will not take this sitting down,” McKissic said. 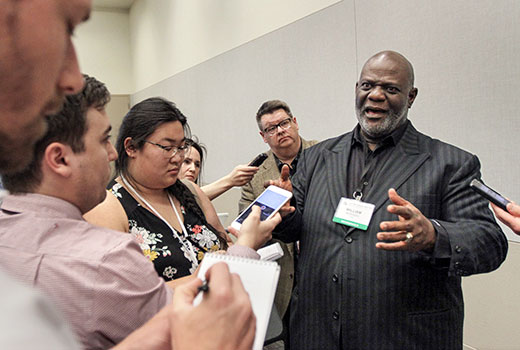 William Dwight McKissic Sr., pastor of Cornerstone Baptist Church in Arlington, Texas, speaks with reporters after a resolution similar to one he submitted June 13 on racism was unanimously approved June 14. Messengers adopted a resolution “on the anti-Gospel of alt-right white supremacy.” (Photo by Van Payne)

McKissic found himself begging many black pastors not to leave after Tuesday’s inaction, he told reporters. He thinks “this convention still has a future,” McKissic said, while acknowledging much work remains to be done. “I think [Southern Baptists] want to get it right.”

In bringing the resolution to messengers Wednesday, Resolutions Committee chairman Barrett Duke apologized to the convention on behalf of the panel.

“We regret and apologize for the pain and the confusion that we created for you and a watching world when we decided not to report out a resolution on alt-right racism,” he said. “Please know it wasn’t because we don’t share your abhorrence of racism and especially, particularly the vicious form of racism that has manifested itself in the alt-right movement. We do share your abhorrence.”

A reporter asked Duke at a post-vote news conference if he would like to say anything additionally to the African-American Southern Baptists who expressed their dismay Tuesday evening on social media regarding the refusal to act on an “alt-right” resolution.

In his response, Duke again offered an apology, adding, “We come alongside you as our brothers and sisters in Christ. We believe that we are all together in the gospel as Southern Baptists, and we want to do everything we can to eliminate” barriers and any intentional or unintentional racism that might exist.

The torturous path the resolution took to passage began Tuesday afternoon when the Resolutions Committee offered nine resolutions — all that gained unanimous or nearly unanimous approval — but did not report out a resolution on the “alt-right” from McKissic.

In explaining Tuesday afternoon why the committee did not report out McKissic’s resolution, Duke told reporters the committee agreed with the resolution’s point on racism, but thought it and other “elements [in the proposal] already had been addressed recently” in Southern Baptist life.

At the close of the committee’s report, McKissic sought to bring his resolution to the floor for a vote. He asked that the SBC “would go on record to abate darkness that’s invading our nation right now.” Many “alt-right” members claim to be Southern Baptists, he said.

His motion clearly failed to gain the two-thirds majority required in a raised ballot vote. In the evening session, a similar motion from the floor fell short again, gathering only 58 percent in a vote taken by marked ballot.

SBC president Steve Gaines spoke to messengers late Tuesday night before they voted on bringing an “alt-right” resolution to the floor.

“I want to encourage you: Let’s make sure before we leave Phoenix everyone knows we have spoken forthrightly that God loves everyone and we love everyone, and the whole world knows that we, in Christ …, come against every kind of racism that there is,” Gaines said.

Duke, a member of Emmanuel Baptist Church in Billings, Mont., is executive director of the Montana Southern Baptist Convention.