An early retirement incentive recently offered to 33 employees of the South Carolina Baptist Convention does not reflect immediate serious financial difficulties for the state denomination, even though Cooperative Program support from churches has tumbled over the past decade and shows few signs of rebounding.

SCBC executive director-treasurer Gary Hollingsworth told The Courier there is no “looming financial crisis” for the state convention but said he is motivated by the possibility of continued “flat-lined or decreasing” CP giving in the future — even as he prays negative giving trends will turn around.

Cooperative Program giving from churches to the SCBC declined from $33.48 million in 2007 to $27.56 million in 2016. Since 2012, state convention messengers have adopted consecutive annual budgets of $28.5 million, but income has fallen short every year except one. This year, giving lags the budget by almost 8 percent, and Executive Board planners have already announced they will present a pared-down budget of $28 million for 2018 at this year’s annual meeting in November. 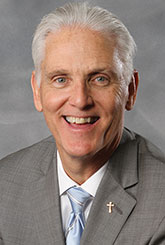 “We’re blessed to have some reserve funds,” said Hollingsworth, “but down the road that may not be the case, depending on how Cooperative Program [giving] goes.” At the end of 2016, the uncommitted fund balance for Executive Board ministries was $2.66 million, according to Pam Carroll, the SCBC’s chief financial officer.

On April 26, at a meeting in the Baptist building in Columbia, Hollingsworth presented an early retirement option to 22 of the convention’s 70 full-time staff members, along with 11 employees of the convention’s White Oak Conference Center in Winnsboro. Employees have until June 9 to accept or decline the offer, and retirements accepted under the plan would become effective June 30.

Hollingsworth emphasized that the early retirement option is “totally voluntary” and that there has been no pressure on employees to accept the offer. He said employees should choose early retirement “only if it would be a blessing to them.” The day he announced the plan, he said the incentive was being offered “as a way to possibly bless those who … may still be able to serve the kingdom significantly in different ways during the years ahead.”

“[We are] offering something that could be more of a potential blessing now, when it could be more positive and voluntary, as opposed to being forced if there is a financial crisis out in the future,” Hollingsworth said.

Making early retirement available to 33 employees could possibly have “an incredible effect on the number of our staff,” Hollingsworth told The Courier, “but we won’t really know until after they make that declaration.” He said his staff is prepared for a range of scenarios — depending on whether all, some or none of the eligible employees elect to take early retirement — and that essential ministries will continue to be covered if needed by reassigning staff members and making sure critical positions are filled.

Hollingsworth added, “There is no magic number [of employees] we are trying to get to.”

The SCBC early retirement incentive comes one year after the SCBC Executive Board voted to seek a buyer for the convention’s White Oak Conference Center, citing, among other factors, the financial burden of maintaining the 841-acre complex, which includes hotel, dining, meeting and recreational facilities. Over the past 15 years, the convention has channeled an average of $614,000 annually into White Oak’s operations, and the conference center faces estimated deferred-maintenance costs of $3 to $4 million.

While there has been no formal offer for the White Oak property, Hollingsworth said the convention is in “serious dialogue” with possible buyers.

Hollingsworth, who was named SCBC executive director-treasurer in January 2016, said one of the first things the Executive Board asked him to do was prepare a recommendation on the possibility of selling the Baptist building, a three-story, 80,000-square-foot office facility located just off I-126 near downtown Columbia. The building was constructed for $5.6 million and opened in September 1994.

“It came down to three things,” said Hollingsworth, who presented his recommendation to the board in October 2016. “Does [selling the building] make financial sense, strategic sense and geographic sense? At least for the here and now, there were no reasons for us to make this an immediate item.”

Hollingsworth said South Carolina’s relatively small geographical size lessens the need for decentralized, multiple offices across the state, as staff members are able to reach any place in the state in less than three hours. He also pointed to the fact that the Baptist building houses the offices of three ministry partners — South Carolina WMU, the Baptist Foundation of South Carolina, and South Carolina Baptist Ministries for the Aging — and selling the building would require that those ministries lease or buy new office space. He also noted that commercial real estate prices in the vicinity of the Baptist building reflect a “buyer’s market rather than a seller’s market” and that the convention might not get the “best return on our investment” by selling the building at the present time.

“But clearly we left [selling the building] on the table as an option in the future — again, depending on how things might change,” he said.

Hollingsworth said he prefers not to talk about “budgets and buildings” but would rather focus on the convention’s vision for evangelistic and missional opportunities. “I know budgets and buildings are important,” he said, “but it’s the vision that keeps you going.”

“A lot of churches rightfully ask … what is the relevancy of convention life and what is the value-added that any denominational structure can bring, and we’re trying to stay focused on that,” he said.

“I think as churches begin to realize either the value-added or the relevancy [of the convention], my prayer is that then we will see a [turnaround in the giving] trend.

“As a denominational leader in the convention, I pledge that we’re going to be the very best stewards of the dollars the churches entrust to us, whatever that amount may be,” he said.