Danny Nicholson says every calling starts with a story. This is his.

In the summer of 2016, he and his wife, Debra, were sitting on a bench outside their favorite beachside restaurant, waiting for a table. An African-American boy, 5 or 6 years old, zigzagged through the sand and darted across the weatherbeaten wooden deck, charming everyone and making fast friends with all whom he encountered, especially the Nicholsons.

Danny struck up a conversation with the adults accompanying the boy and told them, “That little fellow is a special kid.”

“We’re his foster parents,” they replied. Nicholson told them he had a special appreciation for what they were doing because he had been adopted as an infant.

Later, inside the restaurant, when both families had finished their meals, the boy and his parents came over to say goodbye. “We hugged that boy and loved on him,” said Nicholson, and then, in a moment that Nicholson says is hard to describe “except that it just strikes you,” the boy looked into Debra’s eyes and said, “Will you come to me in my dreams?”

“When they walked off, we felt like we had been on holy ground — at a seafood restaurant,” he said. “I looked at Debra and said, ‘Honey, I have no idea what this means, but I know this: We just experienced a holy moment.’ I mean, we wept.” 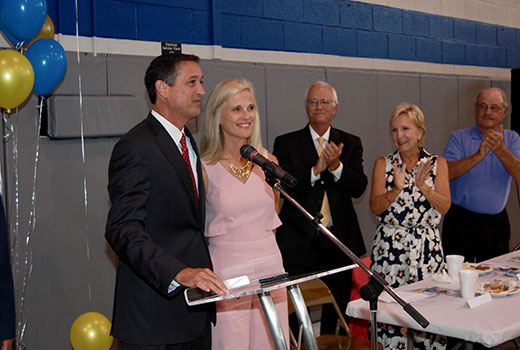 Danny and Debra Nicholson are welcomed at a luncheon attended by Connie Maxwell trustees and students as well as local and state government officials.

Over the next few months, that “holy moment” kept replaying in their thoughts and conversations. Every other day brought a TV commercial about dreams or a newspaper article about an adopted child.

Then Nicholson heard of an opening for president of Connie Maxwell Children’s Home, a place he knew well because he had served as a trustee for the ministry years earlier. “Little by little,” he and his wife began imagining a different life from the one they had enjoyed for the previous 30 years, with Nicholson serving as a successful college development officer.

Twelve months after their “life-changing” experience at the restaurant, on July 27 of this year, Nicholson was named the 10th president of Connie Maxwell Children’s Home.

“You have to have a particular kind of faith to even imagine that God can orchestrate” such a life change, Nicholson said. But there’s no doubt in his mind that the experience of being invited to lead Connie Maxwell “unwound out of that little boy’s eight words: ‘Will you come to me in my dreams?’

“We felt like [that experience] was calling us, pulling us [to Connie Maxwell], and we feel we’re in the right place, that God called us here,” he said.

Nicholson, who was born, premature and underweight, to unwed parents, was adopted after spending the first two months of his life in the hospital by a couple “who loved me so unconditionally that there was never any place to think that they weren’t my mom and dad.”

Former Connie Maxwell president Ben Davis said Nicholson is going to be a good president because “he’s a relational person who likes people,” adding, “He’s a strong Christian layman with a heart for children and a heart for Christian ministry. He and his wife are a good team.”

Search committee chairman B.M. Cave said trustees were “looking for a leader who could help us with fund raising, finances and endowment.”

“He was the fit,” said Cave. “He’s here for the long term, and we’re looking forward to what’s next for Connie Maxwell.”

Nicholson, a graduate of Charleston Southern University with a Ph.D. from the University of South Carolina, has been involved in higher education fund-raising work since 1984. 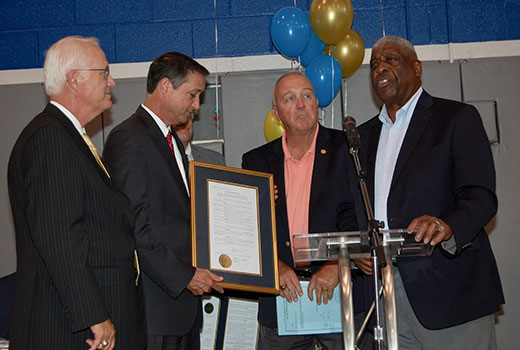 The ministry of Connie Maxwell Children’s Home, which is celebrating its 125th anniversary this year, was praised in recent resolutions adopted by state and federal legislative bodies. From left: Connie Maxwell interim president James Wright and president-elect Danny Nicholson accept a framed copy of a resolution from state senators Mike Gambrell and Floyd Nicholson, presented July 27 at the ministry’s annual trustee picnic. Similar resolutions were received from the S.C. House of Representatives and the U.S. House of Representatives.

He has been married for 33 years to his wife, Debra, a first-grade teacher, and they have two sons: Bryson, 23, and Taylor, 27, both working musicians. In the earlier years of his adult life, Nicholson himself was also active as a singer/songwriter, singing with his band at churches and other venues and producing four original albums, which he sold to support mission causes.

Nicholson’s early experience with Connie Maxwell came through serving as a trustee from 1995-2000. He was elected vice chair and board chair during his term.

He remembers his first trip to the campus. He arrived late in the evening for the following day’s board meeting and went to his room in one of the guest cottages on campus. After he settled in, he tried to fall asleep but was troubled by the thought: “What if I were lying in this bed tonight and didn’t have anybody I could call my momma or daddy? Then I cried with great joy and gratitude, thanking God for giving me a mom and a dad.”

“But for a lot of these kids, they lie down at night and don’t know where they are going to be next,” he said. “I’m afraid a lot of people don’t pause to really think about that; they don’t think about what it would have been like if they had been passed around like a bag of potatoes.”

“When you think about every kid who’s abandoned, or every kid who has to be separated from their parents, that’s where a lot of our society’s ills are happening.” For those kids, he said, there is an “unrest, a need to belong, an aching in their bones for somebody they can call family.”

“I want to help everybody empathize and understand the plight of these children. We’re all trying to find the face of God, and I would submit that the greatest thing that defines the face of God would be a child without a home. [As Connie Maxwell president] I’m going to encourage people to look in the mirror and see that they, themselves, are that adopted child.

“We’re all adopted. We were lost, separated by sin from a family — our Father — and somebody loved us enough to give us that place, and we were rescued, saved. In a lot of ways, I don’t think we’re very different from an adopted child.”

“I am thankful I had a place to call home,” he said. “I had a tree in the backyard and a basketball hoop and a mom who called to me from the back porch to come home to supper. And I knew where to go when she called.”

“That’s all so simple, but on a very profound level, it’s everything we ever want in our lives.”