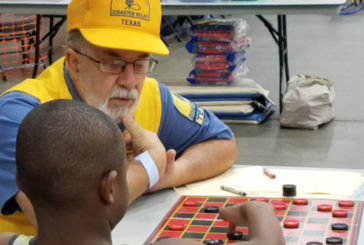 A Texas Baptist Men volunteer plays checkers with a boy whose family was displaced by recent floods.

“Last week we learned that the Red Cross and several other partners, including the City of Dallas, were creating a shelter at the convention center,” Harmon said. “The Texas Baptist Men Disaster Relief set up childcare at the convention center, and they needed help immediately to supplement the Texas volunteers. So Randy [Creamer, SCBC Disaster Relief director] and I decided I would get on a plane and go. Jennifer McJunkin dropped everything and came with me.”

Harmon said that by Friday evacuees had been flown into Dallas from Galveston, Port Arthur, and Beaumont on the coast, and the Dallas News reported that more than 1,400 people were scheduled to arrive by Friday on more than 20 airplanes. She expected more evacuees over the weekend, but evacuation plans are constantly changing.

“Jennifer and I are assisting with childcare for age birth to 7 at a temporary daycare center provided by one of the Texas childcare units,” Harmon said. “On our first day, we cared for 79 registered children in a closed-off, safe area. There were about 50 children age 8-12, and we led activities in the larger space for them. Those activities are designed to help them be active and burn off some steam.”

Harmon is no stranger to serving children. Before transferring to disaster relief, she was the long-time associate director of childhood ministries on the convention staff and served South Carolina Baptists by providing training for the convention’s two disaster relief childcare units and its 120 active child care volunteers.

“I have worked here at the childcare registration table, and that gave me the opportunity to speak to parents,” she said. “A lot of them had to leave homes suddenly, or were rescued by boats. Before arriving in Dallas, many were shuttled around to other shelters and then flown to Dallas, so they are exhausted. By the time they arrived, they were so grateful to have a place to rest.

“The childcare provides children with a safe and secure space while the parents meet with FEMA (Federal Emergency Management Agency) and other assistance agencies, take a shower, and get their living space in order. There are a lot of partners here serving the evacuees. Beyond Baptist disaster relief, there’s the Red Cross, and the Salvation Army is providing food.”

Creamer encouraged South Carolina Baptists to visit and make relief donations at https://secure-q.net/Donations/SCBCDonations/2969 . He said South Carolina teams are not yet mobilizing for Texas relief because Hurricane Irma is intensifying in the Atlantic.

“Once we have an idea of Irma’s track we will have a better sense of what teams we can provide to Texas relief,” he said. “We know they are going to need mud-out teams.”