EDITOR’S NOTE: Story updated Sept. 25. Over the weekend (Sept. 23-24), Southern Baptist Disaster Relief (SBDR) workers learned the situation has changed in Puerto Rico. The extent of the damage has made the situation extremely volatile and has temporarily complicated SBDR’s ability to get in to Puerto Rico. SBDR reported it will be doing everything possible to get onto the island and minister to the people there. Updates will be sent to Baptist Press as information becomes available.

After Hurricane Maria knocked power out for nearly the entire population of Puerto Rico, the island’s infrastructure is devastated and initial reports estimate that it will take months before services can be completely restored.

On Thursday afternoon, Sept. 21, FEMA officials sought to organize a response in Puerto Rico with Southern Baptist Disaster Relief (SBDR) as well as American Red Cross and the Salvation Army.

“At 3 p.m. yesterday (Sept. 21), FEMA asked us to get a plan together to send teams to Puerto Rico to start serving 200,000 meals daily,” Porter said. “By 6 p.m., we had kitchens capable of feeding 100,000 meals a day committed to be driven to Florida, packed onto boats and shipped to Puerto Rico.”

When Irma smashed through the Atlantic and the Caribbean a week and a half ago, the damage sustained in Puerto Rico was severe, but the island avoided a direct hit.

An SBDR kitchen from Alabama had been diverted from Puerto Rico to the U.S. Virgin Islands at the request of officials because of the damage sustained there. That unit (along with another) will be serving 5,000 meals a day in the Virgin Islands.

“The whole world is watching what’s happening with these historic storms,” Porter said. “Our response will tell Puerto Rico and the Virgin Islands that Southern Baptists care about you.”

The goal, Porter said, is to have between six and 10 kitchens sent to Puerto Rico and it will take between 200 and 300 volunteers to operate the kitchens and serve the needed meals.

“This is week five of responding since Harvey made landfall,” Porter noted. “A lot of our teams are tired and weary. We really need more Southern Baptists to step up in a big way in the next month.”

Porter urged volunteers to go and serve, especially if they have disaster relief training. Those without training are also welcome.

“If you don’t have training, that’s a big part of what [NAMB’s] Send Relief is for,” he said. “Southern Baptists have ways for everyone to get involved in this huge response.”

NAMB’s vice president of Send Relief, David Melber, also added, “Another part of our approach is to provide support packages to our Baptist churches in the U.S. Virgin Islands and Puerto Rico. We will also be putting together support packages for their pastors.”

Those support packages will include: generators, food, water, financial resources and other items as needs continue to be made known.

“Our desire is to affirm the position of the local church in all the response areas,” Melber said. “Our goal is to get the local church positioned to be the pillar in the community. We also want to make sure local pastors are supported and empowered to lead their churches.”

Southern Baptists have been striving to get as many resources as possible into areas affected by these disasters.

SBDR units in Texas and Louisiana have started moving from the recovery phase to the rebuilding phase. A lot still needs to be accomplished, but several churches have come alongside SBDR to minister. More than 1,000 volunteers from Southern Baptist churches are signed up to serve in Houston through NAMB’s Send Relief ministry between now and the end of October. 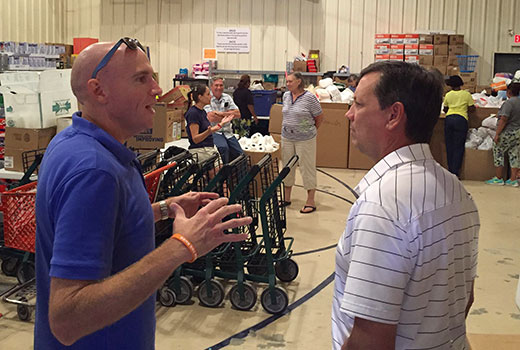 Nathan Lino, left, pastor of Northeast Houston Baptist Church, shares with Kevin Ezell, president of the North American Mission Board, how his church has been ministering since the Houston flooding. Even though the church’s Farrington Mission, located in Houston’s Fifth Ward, was flooded, they have served thousands of people, giving away more than $200,000 in baby supplies, food, etc., and sharing the gospel more than 3,000 times. (Photo from NAMB)

NAMB president Kevin Ezell was in Houston on Sept. 21 to visit with and encourage pastors.

“It is great to see the Southern Baptist family responding in such a big way,” Ezell said. “I heard story after story of churches and individuals that have made unexpected donations or just shown up and asked, ‘How can we help?’ Houston will need this kind of assistance for months and even years to come, but it is incredibly encouraging to see how God is already at work.”

As of Sept. 21, SBDR had served over 1.3 million meals and completed over 2,200 jobs in their response to Hurricane Harvey. Volunteers have seen at least 230 people come to faith in Christ.

In Florida, eight SBDR feeding units are on site throughout the state, serving between 38,000 and 60,000 total meals each day, for a total eclipsing 310,000 served by the end of the day on Thursday during the response to date. SBDR volunteers have completed 507 clean-up and recovery jobs and seen 26 professions of faith in their response to Irma.

Less than 5 percent of the state was without power as of Wednesday evening and that was mostly in the Florida Keys. Even as power gets restored, many residents still need meals provided by Southern Baptists since they have been unable to work in the aftermath of the storm to put food on their own tables.

Watch videos about what Southern Baptists are doing to help hurricane victims: