On a cold morning in February of 2015, I woke up in my warm home, read my Bible, drank coffee with my wife, and woke up my two kids from their snug beds. We fed them breakfast, and I drove them to school. I kissed each of them before they went in to learn from teachers who loved them, in classrooms that were inviting, and among friends they enjoyed.

That same morning, across our small town, my other two children, Sloan and Brooklyn, woke up in a hotel room with a person they didn’t know. Their biological mother had dropped them off and disappeared to get high on methamphetamine. Sheriff’s deputies were called because the person with whom they had been left didn’t know what to do with them.

Sloan and Brooklyn were transferred to the custody of the South Carolina Department of Social Services. They were placed into an emergency foster home for a couple of weeks and then were separated. In just a few short weeks, my 3-year-old and 2-year-old lost their parents, and they lost each other.

Brooklyn was fortunate enough to land in a foster home where she would be loved for eight and a half months. Sloan, however, was labeled a difficult kid. My blond-haired, blue-eyed 2-year-old spent the next eight months being bounced from one foster home to the next. When he came to live with us two days before Thanksgiving in 2015, he had been moved six times in eight months.

I share this because stories matter. Stories communicate. My story helps to put names and faces on a problem that we as the church have been called to engage. 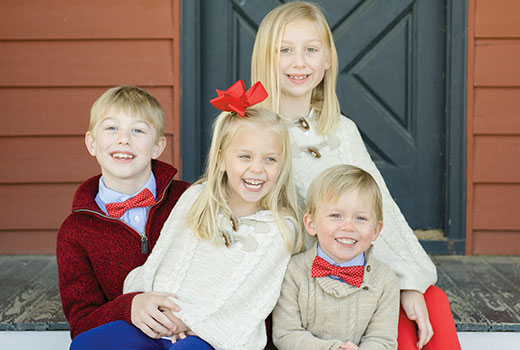 The Thompson kids enjoy a moment during a family photo session.

And my story is just one. There are more than 4,000 children in foster care in our state. Because of the lack of foster homes, 61 percent of those children have to be placed outside of their home county. That means many children who are placed in foster care don’t just lose their homes and their families, they lose their school and friends. They lose everything.

There are hundreds and thousands of Sloans and Brooklyns in our state, kids who need to experience love from great parents and loving churches.

James urged us this way in chapter 1, verse 27: “Religion that is pure and undefiled before God the Father is this: to visit orphans and widows in their affliction, and to keep oneself unstained from the world.”

— Craig Thompson is senior pastor of Malvern Hill Baptist Church in Camden. Adapted from his remarks at the 2017 annual meeting of the South Carolina Baptist Convention.