When Karin Marzilli was diagnosed with lung cancer in 2016, the experience not only led to a resurgence of her faith, but also her son’s.

Evan Marzilli, 26, a former University of South Carolina and College World Series outfielder, went from disbelief that a family member had cancer to a stronger belief in God.

“It was one of those things I never thought would happen,” said Marzilli of his mother’s illness. “She is the most Christ-loving woman I know. She is a good example for me in this whole thing. As far as keeping the faith, [this experience] has definitely brought me closer to God.”

Marzilli played on the Gamecocks’ College World Series championship teams in 2010 and 2011 and is now a center fielder for the Arizona Diamondbacks’ Triple-A affiliate Reno Aces in the Pacific Coast League. Originally from Rhode Island, Marzilli was playing in Mobile, Ala., in 2016 when he rededicated his life.

“I will never forget asking God to use me as an instrument for others because of what I was going through,” he said. “I had completely derailed myself from who I was as a person and who I wanted to be. My job and other things were idols in my life.

“It was one of those times when you hit rock bottom. There is only one place you can look, and I looked [to faith],” said Marzilli.

He wanted faith, and not center field, to be the center of his life.

“One of my buddies said, ‘Baseball is what I do, not who I am.’ To say it and [actually] be that way are two different things. That is really hard,” said Marzilli.

“Baseball is its own world. It is your career, and you can get sidetracked. The toughest part is losing focus of your priorities.”

Marzilli began searching for a deeper understanding of the Bible. When he had questions, he looked to Scripture rather than himself and others for answers. He prayed.

Living by faith is a daily thing, he said. “It is not something you can forget about for a few days and come back to. It needs to be a part of your life.

“Nothing about Christianity is easy. There are going to be tough decisions, and you have to be accountable for yourself. The way you look at things starts to change. I am going to keep trying to become the person God wants me to be.”

Marzilli deleted some music from his phone, changed his language and broke “certain habits” as his faith became a priority in his life.

“Jesus means everything to me,” he said. “It’s indescribable. He is the center of my life. I know that every decision [I make] deals with Him.”

Wearing a cross given to him by his mother, Marzilli has found strength in Philippians 4:13, which is inscribed on the cross. 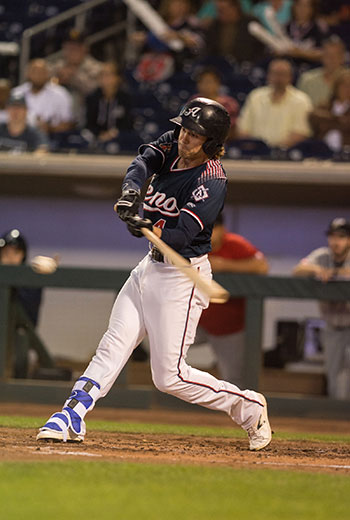 “That whole verse is all about strength,” he said. “With God you can really get through anything, so that verse means a lot to me. The fact that my mother gave it to me is another huge thing.”

His family has been “ecstatic” with his mother’s improved health after chemotherapy and radiation treatments. “We keep praying for her,” he said.

Another verse that is important to Marzilli is Matthew 6:34: “Therefore do not worry about tomorrow, for tomorrow will worry about itself. Each day has enough trouble of its own.”

“I look into the future and worry about things,” he said. “That is one of the verses right now that is a perfect one
for me.”

Before the 2017 season, Arizona moved its Southern League franchise to Jackson, Tenn., from Mobile. Marzilli played 95 games in Jackson in 2017 before being promoted to Reno.

His teammate in Jackson, infielder Travis Denker, became a role model — a distinction that places him in the same company as Marzilli’s parents, Steven and Karin.

“[Denker] has helped me, whether he knows it or not,” said Marzilli. “He keeps me in check. He is there to talk to, to enlighten me. He is definitely knowledgeable.”

Denker, who roomed with Marzilli on the road, said, “It’s a relationship thing with God. I think Evan is trying to make himself closer to God every day.”

Jackson pitcher Gabe Speier said of Marzilli, “I can tell that he is a man of God. I believe he is strong in his faith.”

Left fielder Stewart Ijames, who teamed with Marzilli in Jackson and Reno and attended chapel and Bible studies with him, said he observed Marzilli’s faith by the way he went about his business “in the right way.”

Marzilli, who was drafted in the eighth round by the Diamondbacks after South Carolina’s College World Series runner-up finish in 2012, was named to the CWS All-Tournament team in 2010 and 2012. He is fourth all-time with 71 CWS at-bats. He was on the Southeastern Conference All-Defense team in 2012.

“Winning the College World Series twice was an incredible dream come true,” Marzilli said. “In the first one, I bunted over the game-winning run, and that was pretty cool.” Marzilli also was Academic All-SEC, with a 3.5 GPA in biology.

His on-field success has been fueled by his speed (home-to-first-base in 3.8 seconds), defense and improbable catches.

“You have to be really athletic first, and after that it is really [about] being smart,” he said. “You read players. I think that is the difference in the good and the great guys. There are no limits to how much you can do by leaving no stone unturned and working through.”

His Jackson teammate Speier said, “He is a defensive specimen. He runs down balls that guys can’t even get to. When you have a guy like that in your outfield, you have a lot of confidence.”

Jackson pitcher Josh Taylor said that Marzilli has brought energy to the Generals. “He is always upbeat and always here for the team, making sure everyone is doing their job. He is a leader.”

Marzilli’s talent extends beyond the baseball field. He plays the guitar, oboe, clarinet, bass guitar and drums, and he played in middle school and high school bands. “I love doing everything,” he said.

His goal is to be a Major League All-Star and win a World Series.

His inspiration comes from his parents. “I know they will be proud of me no matter what. I want to debut [in the majors] in front of them, and I want them to know they were just as big a part as my playing was. I wouldn’t be there without them.”

On his path to the majors, Marzilli wants to “show what God is capable of.”

“I think that is why He put me in baseball. I think I can help my family, my friends and a lot of people I don’t know yet. He put here for a reason, to do that.”

Marzilli said his spiritual goal is “continued growth like I have had in the past year.”

“I want to be with Christ forever.”

— Bill Sorrell is pastor of First Baptist Church of Whiteville, Tenn., and a freelance writer.