Summer is traditionally a time when families and schools take a break, but it is a busy and spiritually productive season for those who lead Christian youth camps.

Over the last three months, Baptist-related summer camps in South Carolina reported attendance in excess of 18,000. In addition, more than 2,200 children and youth made personal decisions for Christ (salvations, recommitments, affirmations of calls to ministry vocations) at those camps.

“Camp is the perfect place for campers to grow,” said Samantha Brewer, a cabin leader at Camp La Vida, a ministry of South Carolina Woman’s Missionary Union. “The metamorphosis is beautiful to witness when a camper ‘gets it’ or has an ‘ah-ha!” moment.” 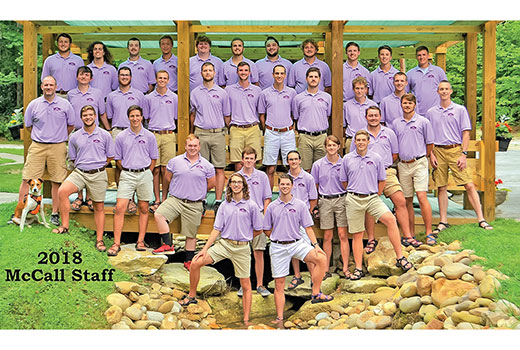 Matt “Spinner” Allen, director of McCall RA camp in the mountains of Pickens County, said God “has done a marvelous work in the lives of campers and staff” throughout the summer. In addition to working with the campers, staff members took nine mission trips throughout the summer to points inside and outside the U.S. “Missions education continues to be at the heart of our efforts,” said Allen.

At Anderson University, where Clayton King Ministries holds Crossroads Summer Camp, King said he is “always amazed but never surprised how the Holy Spirit calls students to salvation and to the mission of taking the gospel to the world. The spiritual hunger that the students and leaders brought with them … made the year so special.”

And at North Greenville University, where more than 7,000 middle- and high-schoolers attended LifeWay Christian Resources’ Fuge and M-Fuge camps, and NGU students and staff embarked on mission trips to Wyoming, Cuba, Costa Rica and Nicaragua, campus pastor Steve Crouse said the school “is called to make intellectual disciples who are grounded in spiritual formation.”