What a great name for a pastor: Church. Wes Church, that is. He is the new senior pastor at First Baptist Church of Columbia, having served on staff for 16 years at the church. Even though he is stepping into a new position, he has a history of faithful ministry in the 200-year-old historic church.

In 1988, Kenny and Cindy Church, along with sons Ken and Wes, moved to Spartanburg. A few months later they joined Roebuck Baptist Church, where I was the pastor. I had the privilege of baptizing 9-year-old Wes and his older brother, Ken, together. I was blessed to watch Wes grow in his faith for a short time before I accepted the pastorate of another church in 1994. In 1995, Tim Williams became the pastor at Roebuck, where he continues to serve. Tim said, “Wes was bright, talented, and, best of all, committed to Jesus Christ. I am confident Wes will be a great pastor that God will use to lead one of our most significant and historic congregations to new heights.” 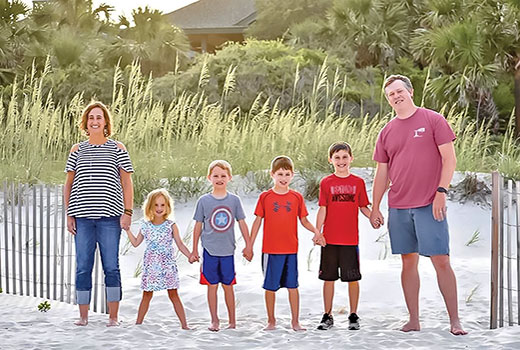 Wes Church and his family.

It is always encouraging to watch someone mature from a child to an adult and make an impact serving the Lord. Wes comes from a strong Christian family. He attended Columbia First Baptist while he was a student at the University of South Carolina and was interested in the college ministry there following graduation. However, he was already committed to a summer job and did not feel he could apply for the position. His mother encouraged him to inquire about the intern position. He accepted the position of college intern in July 2002. A few months later, he became the college minister. Sixteen years later, he was unanimously called as pastor. She said, “I have always prayed that my boys would be in the center of God’s will. I am very grateful that God has brought Wes to this place. God has used him to minister to others throughout his life, and I am excited to see God continue to use him as the senior pastor of First Baptist Church, Columbia.” 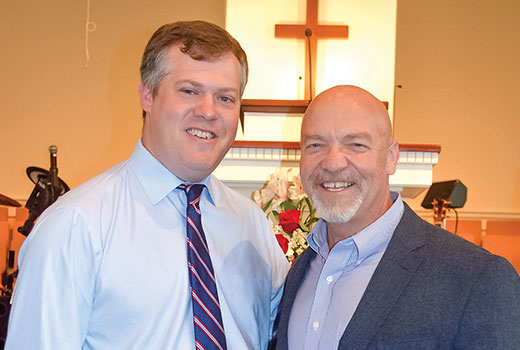 Some may think it is surprising that a soon-to-be 39-year-old’s first pastorate would be at First Baptist of Columbia. However, after interviewing several people who know him well, a consistent response emerged: “I am not at all surprised by this.” David Satterwhite, minister of music at Roebuck for over 30 years, said, “When Wes was very young, I could tell God had great plans for him. He was a natural leader.”

This issue of The Courier focuses on discipleship, and Wes is committed to evangelism and discipleship. He believes being a disciple and helping others to become disciples are what it is all about. He said, “I have great hope that First Baptist Church will grow as a congregation, filled with fully devoted followers of Christ, who love God, love people, and make disciples.” He believes that “the best place for true life-change and discipleship to occur is within the context of a small group.” He understands the importance of discipleship and brings to his position experience in directing the discipleship strategy of the church for the past seven years.

First Baptist is a church rich in history. The first president of the Southern Baptist Convention was also the church’s first pastor, William Bullein Johnson. The chapel is named for one of the founding fathers of Southern Baptist Theological Seminary, James Petigru Boyce. It is one of the larger churches in the South Carolina Baptist Convention and now occupies one entire city block in the state capital.

While Wes is in a new position, he is not new to the congregation. The love between pastor and people is evident. He possesses unique gifts, an engaging personality, a thirst for excellence, an unwavering commitment to Christ and His church, and a love for the people.

I believe Columbia First Baptist Church has made a wise decision, and I will prayerfully and expectantly watch as God, working through Wes, accomplishes His purpose and glorifies His name in the midlands and beyond.