Ryan Succop still gets a laugh out of being tagged “Mr. Irrelevant” in 2009. That’s the nickname traditionally attached to the player chosen last in the NFL Draft.

“I think God has a sense of humor in making you wait [during the draft], and here we are 10 years later. I’ve been very blessed,” said Succop, the placekicker for the Tennessee Titans.

Even though the former University of South Carolina player was selected No. 256 in the last round by Kansas City, he never considered it a negative.

“I always looked at it from the beginning as an opportunity,” he said. “I always thought, man this is amazing — I am getting drafted to play football and to do what I love. I feel like God has given me this ability to play this game. I want to try to maximize that.”

Succop, 32, has made the most of his opportunity. He has two NFL records, two Kansas City records and two Titans records. He was signed by Tennessee in 2014.

While he said that he feels blessed by the records, he doesn’t think about them too often.

“It’s more about helping your team win,” he said. 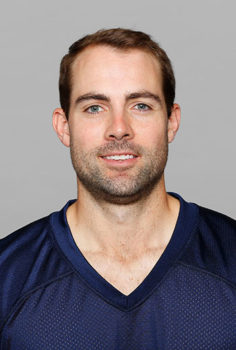 Playing at South Carolina was an “unbelievable thrill,” he said. “We have some of the most passionate fans in the country, and being able to play against Florida, Georgia, Tennessee and Clemson every year was awesome. Having that opportunity is something I am really thankful for.”

At South Carolina, he performed placekicking, punting and kickoff duties for the Gamecocks. His 251 career points ranks 10th on South Carolina’s all-time list.

During his first couple of years at South Carolina, Succop began to realize how much he needed a personal relationship with Christ. “That is when I really grew in my faith,” he said.

Growing up at St. Aloysius Catholic Church in Hickory, N.C., he had always believed in God and his family always went to church.

At South Carolina, he was invited to Bible studies by teammates. “This was different, because it was my peers encouraging me,” he said.

As he began studying the Bible, he realized his need for Jesus. “I couldn’t do it on my own,” he said.

Away from home and on his own, Succop faced the pressure of kicking in front of 80,000 fans. He attended Shandon Baptist Church in Columbia and began to claim his favorite Bible verses: Philippians 4:6-8.

“That is talking about not being anxious, not worrying,” Succop said. “For me, that really resonated. The more I spent time in God’s Word and the more I prayed, the more at peace I became in those [pressure] situations. I am really thankful for that.”

Faith has given Succop a feeling of freedom along with an appreciation of grace.

“Being able to know that you have that salvation is a beautiful thing,” he said. “Jesus means salvation. We are saved through faith. It means forgiveness of sin. It is a beautiful picture of grace. It means everything.”

Succop and his wife, Paige, have experienced the blessings of being a parent. Their son was born in 2015 and their daughter in 2018.

Having children has grown his faith. “Whether we met the baby through ultrasound or when the child was born, that amazing moment — knowing there has to be a creator for that — strengthened my faith a lot,” said Succop.

His goal is to continue growing closer to Christ, to depend on Him “more and more and stay in His Word, stay in that relationship.”

“When I am in the Word consistently and when my prayer life is good, that is when I am the strongest in my faith,” he said. “When I get away from that or when I don’t make the time to do that, I certainly can tell the difference.”

Succop is among other Titan players who have a strong faith. “We can all be there for each other and push each other,” he said. “We have Bible study during the week. There is a chapel service on Saturday nights that provides more opportunities to listen to the Word. I am thankful that is part of playing football.”

He wants to be an encourager to teammates and to make his faith known.

Tennessee safety Jonathan Cyprien said of Succop, “Whether he knows it or not, he does [impact us with his faith]. From what I see, his faith is unbelievable. He is a true Christian. He represents what Jesus wants disciples on earth to be like.”

Taywan Taylor, a Titans wide receiver, called Succop the best kicker in the NFL. “He is always giving glory to God after every kick,” said Taylor. “We love seeing that. That’s what pushes us to keep playing hard.”

Succop wants to continue being a leader spiritually.

“I want to keep trusting God and keep seeking Him,” he said.

— Bill Sorrell is pastor of First Baptist Church of Whiteville, Tenn., and a freelance writer.