The late Billy Graham called himself an “ordinary messenger of the Kingdom of God,” but his legacy as “America’s pastor” is unique.

Graham’s ministry of nearly 80 years is chronicled in the new documentary “Billy Graham: An Extraordinary Journey,” available Nov. 6 on DVD and digital HD. The release was a day before the 100th birthday of the beloved evangelist, who died in February.

His son Franklin, who follows in his father’s footsteps as CEO of the Billy Graham Evangelistic Association (BGEA), said the film tells his father’s story as never before.

“You’ll see things that you haven’t seen before. We go back to the archives,” the son said in a BGEA press release. “We’ve dug deep to pull this material together which gives God the glory but shows how God used one man.” 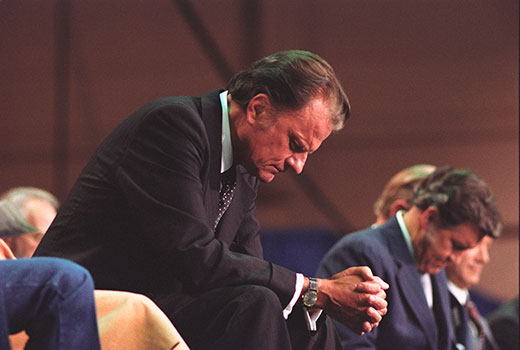 “For me what truly stands out in this documentary is Billy Graham’s love for the lost,” Boatwright told BP. “What’s more, his example can uplift our own daily walk or ministry. A viewing of the production reminds us of what God can do with a life completely surrendered to Him.”

Among details chronicled in the 72-minute film is Billy Graham’s staunch support of civil rights and the harassment he suffered for supporting Martin Luther King Jr., according to a film clip BGEA released. 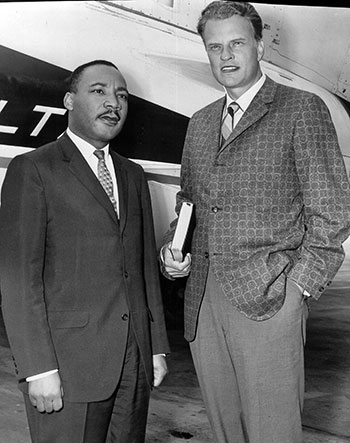 The late Billy Graham, a friend of Martin Luther King Jr., would not hold crusades unless the audience was not segregated by race. (BGEA photo)

“Now today,” the film quotes Graham as saying years after King’s death, “it’s almost impossible for the present generation to understand what things were in those days, and what it took to [support civil rights], how many threatening letters we got, and how many threats against my family as a result of the stand that we took at that time.”

The power of the Holy Spirit remained a mystery to Graham, who personally preached to 215 million people over the course of more than 400 crusades, Franklin Graham said.

“There’s Holy Spirit-filled power in the Gospel, and my father preached the Gospel,” he said. “Now, my father would tell you, ‘I don’t understand how it works, but I know it works,’ and God uses the fact that Jesus Christ is God’s Son, that He came to this earth to take our sins, that He died on a cross.

“He shed His blood for our sins,” Franklin Graham said of Jesus. “He was buried for our sins, and God raised Him to life. There’s Holy Spirit-filled power right there in that message, and that’s what my father preached, and God used that in a mighty way to bring many people to faith in His Son, Jesus Christ.”

Major retailers will carry the film, BGEA said, and it will be available at BillyGrahamFilm.com.