Charleston First Baptist Church has taken a step to officially honor the memory of past members of the church who were enslaved prior to 1865.

On Nov. 11, the church dedicated a marker that says: “In memory of the thousands of enslaved members of the First Baptist Church of Charleston whose names we do not know, but are written in the Lamb’s book of life. Revelation 7:9.”

The bronze tablet was unanimously approved by the membership of First Baptist Church as a way of acknowledging the contributions of the many enslaved members who served in the church but had been largely ignored by history, said pastor Marshall Blalock. 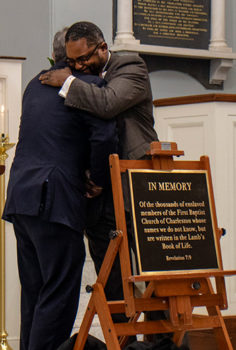 Marshall Blalock and Leonard Griffin embrace after unveiling a bronze marker that honors the memory of enslaved members of Charleston First Baptist Church.

“We can’t change the past, but we can honor those who were unjustly forgotten and work to bring the hope of a world where every person is recognized as uniquely made in God’s image, worthy of respect, and pursued in friendship,” said Blalock. “Only the gospel of grace in Jesus Christ makes that possible, and this memorial honors people who, through the power of the gospel, overcame the indignities and suffering of slavery and now rest in the peace of Christ Himself.”

The plaque was placed in a prominent location next to the exterior door of the historic sanctuary where, prior to 1865, slaves would enter to ascend the stairs for worship. The marker is the first of its kind in one of the historic Charleston churches where slaves were members, Blalock said.

The marker was unveiled in a dedication service attended by leaders from throughout the city of Charleston and the state of South Carolina. Donald Greene, president of the Baptist Missionary and Education Convention of South Carolina, gave the invocation. “My ancestors prayed to God in the balcony of this sanctuary, and tonight their prayers have been answered,” said Greene.

“As pastor of the mother church of Negro Baptists in downtown Charleston, I know that I am, and we are, beneficiaries of the slaves and ex-slaves who worshipped in the balcony and in the back of this church,” said Griffin.

Five months after Abraham Lincoln’s Emancipation Proclamation, 73 ex-slaves “courageously” organized Morris Street Baptist Church, Griffin said. “I am humbled and honored by the invitation to participate in this magnanimous moment of memorializing those believers on whose shoulders we stand today,” he said. 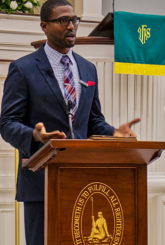 Walter Strickland of Southeastern Baptist Theological Seminary delivers an address on the history of black Christians in American life.

The dedication was followed by a presentation from Walter Strickland, assistant professor of systematic and contextual theology and vice president for diversity at Southeastern Baptist Theological Seminary. Strickland brought to light the forgotten history of black Christians in American life for the past 400 years, much of it forged in the crucible of slavery.

“The prayers of the saints for generations ushered us into the moment we shared [in unveiling the plaque],” said Strickland. “God’s story of redemption was animated by dignifying forgotten members of First Baptist Church of Charleston and the ever-reconciling relationship with Morris Street Baptist Church.”