“It just breaks our hearts. I want to be out here [helping] every waking second,” said Crisp, founding pastor and pastor of the church in Longs, S.C., for 29 years.

Crisp, church members and Southern Baptist Disaster Relief (SBDR) volunteers reached out to deacon Russ Frye and his wife Gerry, who lost most everything in their home of 19 years in the Aberdeen community.

In early October, Crisp met the Fryes, both in their 80s, when they first returned to their flood-damaged home and found mold nearly four feet high in every room. The couple, married for 61 years, had been away during the hurricane and the home was closed up for almost three weeks.

Crisp helped them take water-soaked belongings out to the yard and committed to help them. The home went through a complete tear-out and now all the new sheetrock is hung, along with new doors and trim, Crisp said.

“We’re hoping to start the painting this week. It’s getting close for them,” he said.

Frye said he was so thankful for the support of his church family. A member gave them use of their beach home while the work has been done on their home.

In addition to all the work, the couple has received clothes, furniture and meals, he said. All four of the church’s pastors, including Crisp, were at the house working. 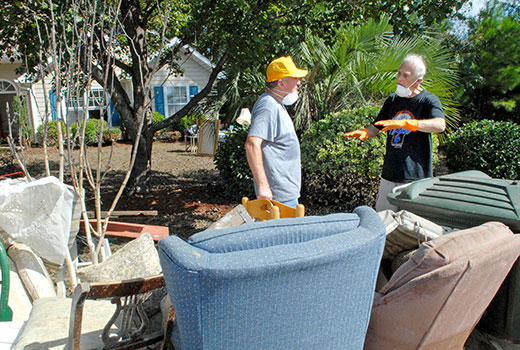 Pastor Lebron Crisp (left) meets with church member and deacon Russ Frye, 84, at his flood-damaged home in Longs, S.C., in October. Frye and his wife, Gerry, 82, returned to see the damage after being away when Hurricane Florence made landfall. Crisp, along with Southern Baptist Disaster Relief teams and church members, are helping the couple get back into their home of 19 years. Frye serves as the lead greeter at Living Water Baptist Church. (Photo by Laura Sikes/NAMB)

“I don’t think any church family can top ours,” Frye said.

For more than two months, church members have served alongside SBDR volunteers who set up a command post in the church’s parking lot.

SBDR closed down the post just before Thanksgiving. The work will transition from recovery to rebuild in December, said Randy Creamer, SBDR director for the South Carolina Baptist Convention.

The church and volunteers are taking a much-needed break, and collegiate volunteer teams will come to help with the rebuild during their break in December, Creamer said. They will work with SBDR crew chiefs and team leaders.

Creamer credited Living Water Baptist Church’s work to a good partnership with Horry County and the Waccamaw Baptist Association during the response in the state. He estimated that volunteers served more than 300 residents from the SBDR site stationed at the church.

“Church members were assisting their community while the flood waters were rising and well before our formal disaster relief resources began arriving,” Creamer said.

He also noted that it has been hard on the areas which were hit two years ago by Hurricane Matthew.

“That’s been especially disheartening,” Creamer said. He asked for continued prayers and support as the work moves into long-term rebuild.

Crisp gave thanks for the seven professions of faith that have been made.

“God’s been good through all of this,” he said. 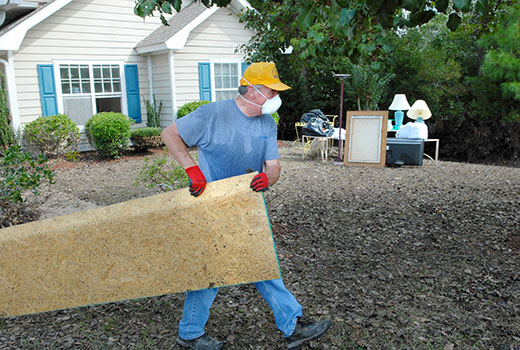 Lebron Crisp, founding pastor of Living Water Baptist Church, helps take out flood water damaged wood and items from the home of church members Russ and Gerry Frye of Longs, S.C. Crisp called the couple’s situation “heartbreaking” and said, “I want to be out here every waking second.” (Photo by Laura Sikes/NAMB)

Georgia SBDR volunteer Ronnie Register, who led the incident command post at Longs for about two weeks, said he was concerned for retirees who had so much damage. Many don’t have flood insurance, he said.

He and his wife Linda, both members of Brushy Creek Baptist in Sparks, Ga., have served for about 10 years.

“With flooding, it takes a long time to recover,” he noted. “A lot of people still need help, and you have to be thankful for all the volunteers. Even when [some] leave, there will be others coming to help.”

Also serving in Longs, were Georgia SBDR team leader Tom Young, and his wife Denise, who worked mud-outs for about two weeks. Young said he was impressed with how neighbors came together to help each other with their homes. Denise asked for continued prayers for people as they work to put their lives back together.

As of Nov. 25, SBDR has provided flood clean-up services to more than 680 homeowners and performed more than 1,200 chainsaw and yard clean-up jobs in North and South Carolina.

In response to major disasters across the United States, including Hurricane Michael — which struck the Florida Gulf Coast, Georgia and Alabama — flooding in the Midwest and fires in the West, SBDR has served nearly 2.3 million meals.

SBDR volunteers have helped more than 6,800 homeowners clean up their homes and yards following flooding and wind damage.

Southern Baptist Disaster Relief is among the three largest providers of disaster relief assistance in the United States. Southern Baptist churches, associations and state conventions all partner to mobilize volunteers, resources and equipment to provide services. The North American Mission Board provides national coordination and assistance in larger, multi-state responses.

To learn more how you can help, contact your state Baptist convention or visit namb.net/sbdr.

— Laura Sikes is a freelance writer for the North American Mission Board.